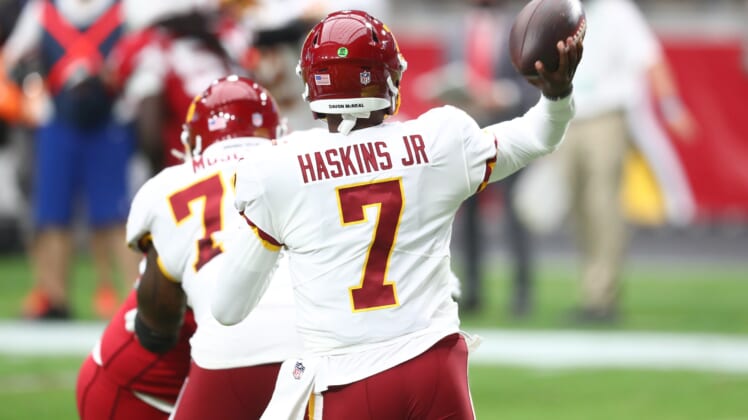 Coming into the 2020 season, the Washington Football Team hoped to see quarterback Dwayne Haskins make significant strides in his second year. Instead, coming off another rough performance, could Haskins be on the verge of being benched?

Haskins, the No. 15 pick in the 2019 NFL Draft, is coming off another multi-turnover performance. Playing like one of the worst quarterbacks in the NFL nearly every week, the 23-year-old may now be at risk of losing his starting job.

Dwayne Haskins in jeopardy of being benched?

According to NBC Sports Washington’s JP Finlay, head coach Ron Rivera met with Haskins this week to make it clear that his play through three games has been lacking. In fact, after regressing in Week 3, the tone of the private meeting indicated he must play better to remain the starter.

Haskins has not been sharp as Washington’s starter this season. Even in the team’s Week 1 victory over the Philadelphia Eagles, he completed just 54.8% of his attempts with one touchdown and averaged 5.7 yards per attempt.

The second-year quarterback showed some signs of improvement the following week. Against the Arizona Cardinals, Haskins connected on 57.6% of his passes, posting an 88.3 quarterback rating and averaging 6.8 yards per attempt.

Whatever momentum he had after the solid showing disappeared in Week 3. Haskins threw three interceptions, fumbled twice and completed only 56.8% of his pass attempts. The mistakes proved to be costly, gifting the ball to the Cleveland Browns and paving the way to Washington’s 14-point loss.

The blame doesn’t all fall on Haskins’ shoulders. Washington’s offensive line ranks 25th in the NFL by Pro Football Focus, surrendering 35 pressures in the first three games. If playing under constant duress wasn’t enough, Washington’s wide receivers are the worst at creating separation from coverage in the NFL.

Alex Smith might seem like a great option, largely for the comeback story, especially after he was cleared for football activities. However, putting him behind this offensive line might put his health in serious jeopardy. There’s no way of knowing if he can move effectively in the pocket and a sitting duck behind this offensive line would have disastrous consequences.

Unfortunately for Haskins, things will likely get worse on Sunday against the Baltimore Ravens. If Rivera eventually benches him, the results from Allen or Smith likely won’t be any better.