5 Reasons why Washington benching Dwayne Haskins is not the answer

5 reasons why the Washington Football Team benching Dwayne Haskins after his Week 3 struggles against the Cleveland Browns is not the answer. 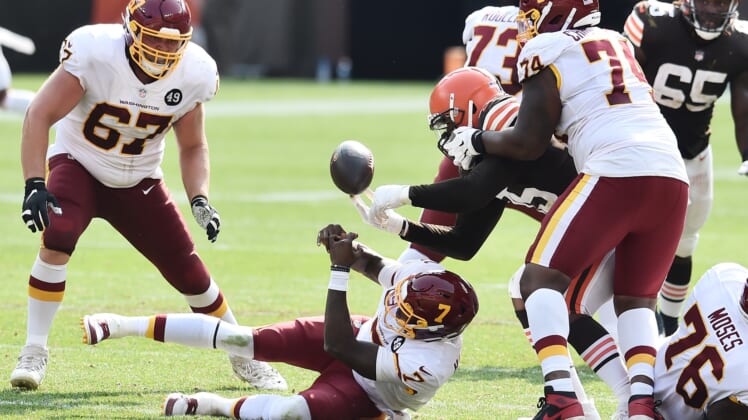 Another week down and another frustrating loss for the Washington Football Team. Week 3 was an opportunity for Washington to get a win against the Browns and get their season rolling in the right direction. Washington is heading into Week 4 playing one of the best teams in the NFL, the Baltimore Ravens.

After their Week 3 loss, there are cries from Washington Football Team’s fans for Dwayne Haskins to be benched in favor of Kyle Allen or Alex Smith. Their reasoning is just. Haskins threw three interceptions against the Browns. All three of those interceptions resulted in Cleveland touchdowns after short drives in a 34-20 loss.

Despite the warranted calls for the benching of Dwayne Haskins, Washington fans need to be patient. Here are five reasons why fans need to understand why benching Haskins is not the answer.

Haskins isn’t looking for excuses, he is looking to improve

Washington’s offensive line isn’t exactly something to boast about. The team is without Pro Bowle guard Brandon Scherff. Washington also traded away future Hall of Fame left tackle Trent Williams to the 49ers in the offseason, and the rest of its offensive line is struggling.

The excuse many Haskins supporters use is that he has no weapons. However, it is simply not true. Terry McLaurin is one of the best young receivers in the NFL. Running backs Antonio Gibson and J.D. McKissic have shown they are weapons in this offense (260 total combined yards in three games).

Despite the inconsistencies on offense, Haskins is still trying to lead. Most young quarterbacks would beat themselves up after the poor performance he has put up through three weeks.

Haskins has been leading the best way he can. He is keeping his head held high and he isn’t looking for excuses. It seems like a part of Haskins realizes he has not been playing well and that is on him. He is staring down receivers and is not making his proper reads.

This is a characteristic a football team needs in their quarterback. Washington has that.

Offensive coordinator Scott Turner’s offensive philosophy has not been an upgrade over what we saw from the former regime under Jay Gruden.

The offense lacks any versatility. The play calling is predictable. Every time the ball is snapped, it seems like it’s the same type of play over and over again. Turner was supposed to bring in a fresh new offense. Yet, Washington’s fans have not seen that.

Washington has unique weapons. Gibson has not been used to his full capacity. McLaurin is not being used as a No. 1 wide receiver. Haskins is a part of the offensive struggles, but Turner is not making life easier for the second-year quarterback.

If the offense is going to turn around, Turner needs to install something new into the offense. Then, Haskins can be judged.

Dwayne Haskins needs to get his swagger back

Watching Haskins at Ohio State, there was this certain swagger around him. During the 17-point comeback versus the Eagles in Week 1, that same swagger started to show again. Haskins needs to play loose and play with confidence.

Haskins has looked timid every time he drops back to pass. He stares down his receivers and doesn’t seem to have the confidence to make big plays. There have been times where he panics and scrambles into the outside pass rushers rather than stepping up in the pocket. This has led to the former first-round pick taking 10 sacks in three games.

Are Kyle Allen and Alex Smith any better?

Alex Smith led Washington to a 6-3 record before his horrific leg injury. His recovery has been unbelievable and the amount of respect he has earned is unmatched. However, it has been a long time since Smith played in an actual game and the rust might be too much to overcome.

Even if he is able to overcome the rust and have one of the greatest individual comebacks in sports history, the fear of injury will loom large for the coaching staff and the organization as a whole. They might not be comfortable calling certain plays due to this fear.

Kyle Allen threw for 17 touchdowns and 16 interceptions in his 13 games with Carolina last season. These are not exactly great numbers. Allen won’t bring anything that Haskins isn’t capable of bringing. He is familiar with the coaching staff, but Haskins’ familiarity with play calling isn’t the problem.

Give Haskins the whole season, so Washington can fully know what they have

Washington has shown the willingness to never quit. This is something the organization has not seen in quite some time. Ron Rivera is doing an excellent job of changing the culture in Washington, and it is already starting to show.

It will be extremely frustrating for fans to sit back and watch their quarterback blow the game like they saw Haskins do versus the Browns. However, he is only a second-year quarterback and it will be more telling how he bounces back from this performance.

Haskins needs the whole season to show us what he is capable of. This will allow Washington to fully move on from him, or they will see that Haskins can be their guy. Three games do not tell the story. Washington fans, be patient. Greatness does not come overnight.