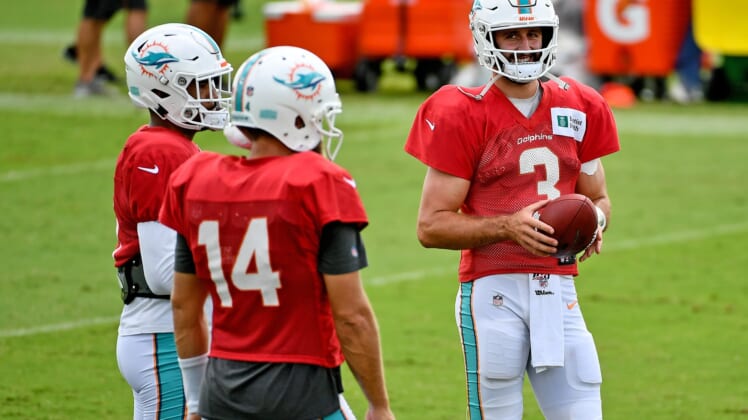 NFL cut-down day has come and gone. Once the clock struck four back east, each team had to be down to their 53-man rosters. It’s in this that a lot of shocking moves were announced throughout the league.

From the Cowboys and Raiders releasing big-name free-agent signings before they have even played a game with their new teams to a couple young former top-10 picks being given their walking papers, here are the most surprising moves of the week.

Signed to a one-year, $3.75 million deal during the spring, this former Green Bay Packers first-round pick and Pro Bowler was set to be the Cowboys starting safety next to Xavier Woods. For whatever reason, it did not pan out. Dallas released Clinton Dix this week and will be relying on a combination of Darian Thompson and Luther King to hold down the starting free safety position moving forward.

A former Pro Bowler dating back to his days with the Houston Texans, Miller signed with New England this past spring after missing the entire 2019 campaign with a torn ACL. The expectation was that the former fourth-round pick would push Sony Michel for the starting job. Instead, Miller was jettisoned from New England before even playing a game. He last suited up for the Texans in 2018, recording 1,136 total yards en route to earning a Pro Bowl appearance.

A fourth-round pick out of Iowa State last year, Butler missed his entire rookie season due to an injury. Apparently, he did not do enough to impress head coach Kliff Kingsbury and Co. during training camp. Arizona shockingly moved on from the talented 6-foot-5 Butler this week. The dude was a legit star for the Cyclones, catching 60 passes for 1,318 yards and nine touchdowns as a junior back in 2018. He should latch on with another team here soon.

A former star at Washington, Jones would have likely been a top-15 pick in the 2017 NFL Draft if he had not suffered a torn Achilles during the program’s pro day that spring. Instead, Jones fell to the Philadelphia Eagles with the 43rd pick. Still only 24 years old, he was released on Saturday. Despite dealing with injury concerns throughout his three-year NFL career, this qualifies as a surprising move. Jones recorded 23 tackles eight passes defended and two interceptions in 12 games a season ago.

Pretty much the most-shocking news of the week, Washington’s brass came to the conclusion that Peterson did not have much more to offer the team. That’s surprising in that the future Hall of Fame running back put up north of 1,000 total yards in each of his two seasons in the nation’s capital. Peterson, 35, has already drawn a lot of interest on the open market. As for Washington, it will be relying on veteran Peyton Barber and talented rookie Antonio Gibson following the release of both Peterson and Derrius Guice.

A full-time starting inside linebacker for Denver over the past four seasons, it was shocking to learn that the team had decided to release him on Friday. Davis, 28, has played at a near Pro Bowl level each of these past four seasons, recording a combined 427 tackles, 18 tackles for loss and 11 passes defended. Look for him to latch on with a team in the near future.

This will go down as one of the worst trades in Patriots franchise history. It was last October that Bill Belichick and Co. dealt a second-round pick to the Atlanta Falcons for Sanu. The veteran proceeded to put up 207 yards in eight games. That in and of itself proves this was a lopsided trade. Then, in shocking fashion, New England released Sanu this week. A total of 26 receptions for a pick that ultimately ended up being stud running back J.K. Dobbins. Ouch!

Yet antother former first-round pick of the Packers, Randall inked a one-year, $1.5 million contract with Las Vegas during the spring. He will not appear in a single game in the desert metropolis after being released this week. It’s a stunning move in that the defensive back is coming off a two-year stretch with the Cleveland Browns that saw him record 146 tackles, 15 passes defended and four interceptions.

After seeking out trade partners for this former top-10 pick throughout the week, Miami released Rosen Friday evening. This comes after the Fins traded a second-round pick to the Arizona Cardinals for Rosen during the 2019 NFL Draft. To be clear, it is a shocking move even with Ryan Fitzpatrick slated to start this season and with rookie first-round pick Tua Tagovailoa seemingly completely healthy.

Talk about a major fall from grace in Duval. It was just this past season that the former No. 4 overall pick tallied 1,674 total yards for the Jaguars. After months of looking to trade the stud young back, Jacksonville shocklingly decided to waive him erlier in the week. Fournette was almost immediately signed by the Tampa Bay Buccaneers after clearing waivers — a clear indication that other teams are higher on him than Jacksonville.