The Kansas City Chiefs and Buffalo Bills still have to decide the top seed in the NFL playoffs, and in the fallout of the Damar Hamlin incident, the NFL could offer the teams a unique choice in how they proceed in the playoffs with Bills-Bengals not expected to be resumed.

Few sports fans around the country aren’t aware of what happened in the first quarter of the Bills vs. Bengals matchup earlier this week. Following a tackle, 24-year-old Buffalo defensive back Damar Hamlin collapsed and went into cardiac arrest after taking a severe blow to his chest. The second-year player had to be resuscitated on the field and still remains in intensive care days later.

The shocking moment brought a stop to the game and an eventual postponement. It was unclear how the NFL planned to resolve the missing game in Buffalo and Cincinnatti’s schedule. Well, on Thursday, ESPN NFL insider Adam Schefter reported that the league is expected to make a decision on the suspended game soon, but he does not believe it will be resumed. This means that the winning percentage will determine playoff seeding.

However, he also mentioned a very unique option the NFL could offer the teams if the Chiefs hold on to their unusual half-game lead.

The Kansas City Chiefs are a half-game above the Buffalo Bills in the AFC playoff standings after Bills vs. Bengals was postponed. With that matchup unlikely to be restarted, it puts both teams in an awkward position with just one bye available in the opening round.

In his report on a resolution to the lost game coming soon, Schefter also revealed the “NFL is considering options such as allowing the No. 1 seed to pick home-field advantage OR a bye week. Another option (an AFC title game between two teams with a differing number of games) is a neutral site (via Pete Sweeney).” 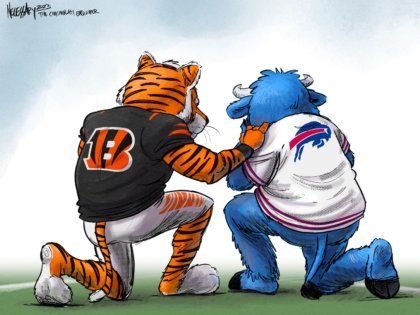 If Buffalo had beaten Cincinnati in Week 17, a tie between the Bills and Chiefs at the end of Sunday would have meant the Bills would have the first-round bye since they own the tiebreaker. After beating KC earlier this season. However, that is out of the question if the game last week is ruled as a tie or no-contest.

Assuming everything holds and the Chiefs stay up by a half-game, offering them the choice of having a bye, or playing in the first week but retaining home field would be a fair medium ground for a difficult situation. The Chiefs are the big losers hear because the Bills did not get to fully compete in a very dangerous matchup against the Bengals.