The New York Knicks appear all in on signing the one they call Jalen Brunson. If New York is able to sway the 25-year-old away from the Dallas Mavericks, they have their long-term point guard.

Brunson does a little bit of everything. He’s a physical two-way guard who’s a plausible shooter, finds his teammates in their hotspots and is coming off an impressive postseason. Brunson is the ideal point guard for head coach Tom Thibodeau’s rotation, as the Knicks have been a defensive-oriented team that aims to be efficient in the halfcourt offense.

In the wake of theoretically signing Brunson, New York has to capitalize on its plethora of assets, enhanced by their series of draft night trades. The Knicks have four potential 2023 first-round draft picks, as well as young players/former lottery selections like Immanuel Quickley, Obi Toppin, Cam Reddish and Quentin Grimes.

Here are two players the Knicks should trade for if they ink Brunson.

The Knicks have a wing glut, which they could ironically use to acquire a more established wing. Trading for Brooks would be a savvy play for the Knicks.

New York has a lot of wings but minimal, if any players outside of RJ Barrett who are definitive long-term pieces to the puzzle. Brooks becomes such a player for the Knicks, giving Thibodeau a physical and auspicious wing pairing.

Barrett and Brooks are tenacious players who make an impact on both ends of the floor. They’re each accustomed to being vital sources of offense and have playoff experience under their belt. With Brunson running the offense and Barrett and Brooks out on the perimeter, the Knicks have an appealing halfcourt offense with players who can clamp down their defensive assignment. They also still have the enigmatic but highly productive Julius Randle.

New York should have the payroll flexibility to re-sign both Barrett and Brooks after next season. Meanwhile, their second unit includes Derrick Rose, Quickley, Grimes, Toppin and Jericho Sims. This is a rotation made up of mostly starting-caliber players.

New York can send Burks, Reddish, two of their 2023 first-rounders and a future second-rounder to Memphis for Brooks. The Knicks utilize some of their resources and get clarity in their starting five while the Grizzlies get a pair of rotation wings, devote more playing time to Ziaire Williams and don’t lose Brooks for nothing in free agency.

All that said, the Knicks may prefer to acquire a more efficient shooter than Brooks to complement Barrett, who’s an inconsistent shooter. Memphis may also prefer to keep their deep-rooted core intact and attempt to re-sign Brooks next summer.

Related: New York Knicks draft results: Breaking down the trades and 3 possible moves using all those extra 1st round picks

The Raptors’ intentions with Anunoby are a gray area given Scottie Barnes’ standout rookie season and the team reportedly being open to trade offers for the former. New York should be spamming president Masai Ujiri’s phone about Anunoby.

Anunoby would be a tremendous fit on the Knicks. He’s a proven defender who has improved some part of his game in every passing season. Anunoby has become a smooth, two-way player and a legitimate scoring option. He’s a high-level shooter from the perimeter and off the dribble, which perfectly complements Barrett’s attacking tendencies.

Brunson brings the ball up the floor. Barrett and Randle attack the rack. Anunoby stretches the floor and ambushes defenses with his ability to put the ball on the floor. One figures New York signs a veteran center. When connecting the dots, this roster creates a prosperous image.

The Knicks’ perimeter attack would feature three players who are no older than 25 and have continually improved (Brunson, Barrett and Anunoby). No one player including Randle would be overwhelmed with leading the scoring charge. If and when this team begins to click, they’d have the upside of the 2019-20 Boston Celtics, a team that featured four reputable scorers (Kemba Walker, Jaylen Brown, Jayson Tatum and Gordon Hayward) and went to the Eastern Conference Finals. 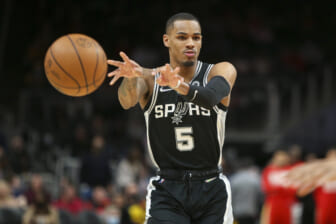 New York can send Quickley, Burks and three future first-round draft picks to Toronto for Anunoby. The Knicks get an ideal wing scorer to play next to Barrett while the Raptors get a pair of immediate rotation players and substantial draft capital, which could be used to execute a blockbuster trade on the spot or in the future (Donovan Mitchell?).

Three future first-rounders plus a pair of quality players is a lot to give up in a trade. With that said, the Knicks’ now-trove of first-round draft picks could be used against them in trade talks, as they still leave this trade with five first-round selections over the ensuing five drafts.