NASCAR doesn't race at Iowa Speedway anymore, but that needs to change. Why should NASCAR return to Iowa and which tracks could lose a date for the venue? 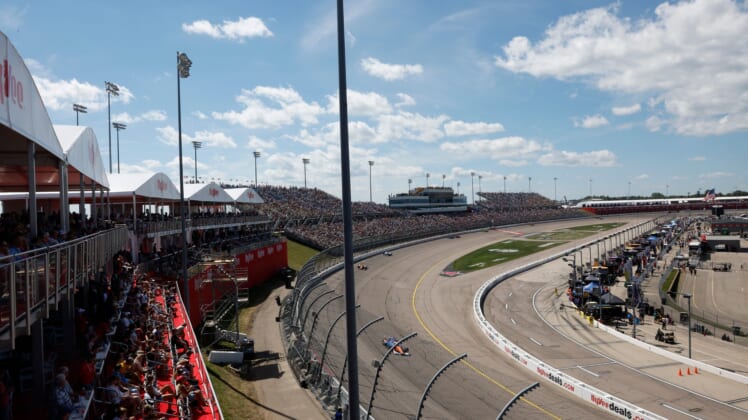 NASCAR did not return to Iowa Speedway when COVID-19 hit during the 2020 season and it was a disappointment to many race fans that love the sport.

However, it’s time to right that wrong and bring NASCAR back to Iowa.

Why should NASCAR return to Iowa Speedway?

The NTT IndyCar Series hosted a doubleheader weekend at Iowa Speedway and it was a major, major success for anyone who paid attention.

Hy-Vee, the sponsor of the race weekend, went all-out that saw an electrifying environment that was off the charts exciting for everyone involved.

Hy-Vee is determined to make Iowa Speedway a destination race for the IndyCar Series as they pumped about $10 million into it and they did exactly that during the race weekend as NASCAR was in Pocono.

NASCAR owns Iowa Speedway but Penske Entertainment and Hy-Vee have completely transformed the track and other series need to jump on the bandwagon if Hy-Vee is willing to do more for the venue.

The state of Iowa and Hy-Vee care about small tows and tracks in the areas. There was an undeniable vibe around the weekend that screamed excitement not only on track but off-track for the fans.

Iowa Speedway is a great track and always has been one of the best on the schedule for racing series. It’s clear the people in charge really care about reviving the track.

The track surface also provides amazing racing since it is a rough surface that creates many lines of racing for both stock cars and open-wheel vehicles.

While NASCAR had a very successful weekend in Pocono, the noise coming from IndyCar has to raise eyebrows from the people who make these decisions on the schedule.

What tracks could possibly be replaced by Iowa Speedway?

The list is likely pretty small but NASCAR needs to figure out a way to get all three series at Iowa Speedway at some point in the next few years.

It might not be for the 2023 season, but Iowa needs a NASCAR Cup Series date and that has been something wanted by fans for a long time.

NASCAR saw the benefits of reducing Pocono from two weekends to one weekend with a packed infield and grandstands. Specifically, Kansas and Richmond could see those benefits if they downsized their schedule.

The case for Phoenix is how they currently host NASCAR’s Championship Weekend. The final race should arguably be the only weekend the venue hosts during the season.

It provides more excitement and wouldn’t be as dull as previous seasons since teams know what to expect. This would be the most ideal route but likely? Probably not.

NASCAR has stated how it wants to be aggressive with making future schedules and this would certainly be an aggressive move that would bring even more excitement.

If the sport can decide to run the Chicago Street Course and get rid of Road America on July 4th weekend, the idea of returning to Iowa Speedway should not be ruled out.

The schedule remained the same for many years so it is very nice to see NASCAR become proactive in making aggressive decisions.

It might not be as easy to just say NASCAR should return to Iowa, but it’s something that needs to happen in the foreseeable future because it should have never left in the first place.

Related: Frankie Muniz has eyes on NASCAR for the 2023 season