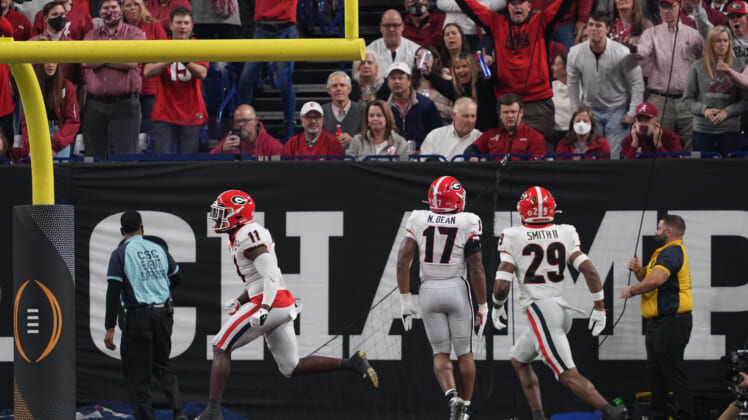 Butkus Award winner Nakobe Dean is one of the reasons why the Georgia Bulldogs are facing off with the SEC-rival Alabama Crimson Tide in College Football Playoff National Championship Game Monday evening.

A likely first-round pick in the 2022 NFL Draft, Dean entered Monday’s game in Indianapolis having recorded 68 tackles, six sacks and two interceptions in 14 games this season.

The Mississippi native almost came away with a huge game-changing play early in the first quarter when a teammate stripped Heisman winner Bryce Young with the ball less than two minutes into the matchup.

Initially, Dean’s scoop and score on a Young fumble was ruled a touchdown to give Georgia a 6-0 lead. But as you can see here, Young’s arm was moving forward. The call was reversed on replay.

This is the type of ball-hawk mentality that has defined Nakobe Dean and the Bulldogs’ defense pretty muh all season. Unfortunately, luck seemed to be on the side of the Crimson Tide here.

Ultimately, Young would lead Alabama down the field on a 56-yard drive that culminated in a field goal by Will Reichard for a 3-0 lead.

Even then, Georgia was able to hold Alabama to a field goal to continue its streak of not yielding a touchdown on an opening drive all season.