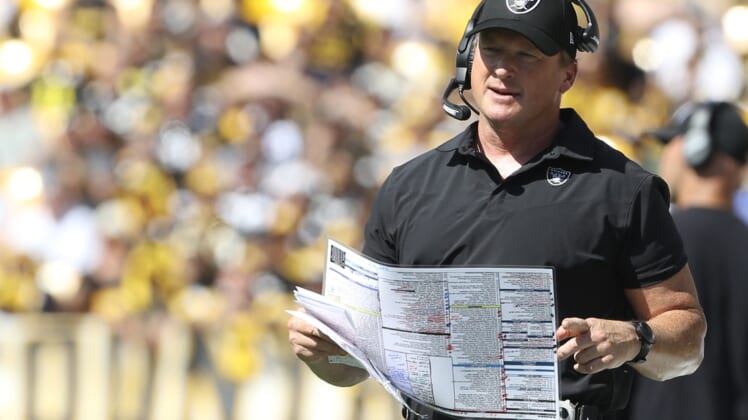 The emails in question are from back in 2011 when Gruden was a member of ESPN’s NFL broadcasting team. He was not employed by the league or any of its teams. Despite this, backlash continues on nearly every front.

One day after his most-recent apology, Gruden is now in the center of what could be another scandal regarding those aforementioned emails.

“The NFL sent the Raiders additional Jon Gruden emails to review on top of the negative one that surfaced last week and, per sources around the league, the NFL is actively monitoring the situation and waiting to see how the team will handle the matter,” ESPN’s Adam Schefter reported on Monday.

What do the new emails mean for Jon Gruden?

At this point, there’s no telling what is included in said emails. It would be foolhardy to draw any sort of conclusion without further information. As for the embattled Raiders head coach, he did apologize Sunday after Las Vegas’ loss to the Chicago Bears.

“I am not a racist. I can’t tell you how sick I am. I apologize again to De Smith. But I feel good about who I am and what I’ve done my entire life. I apologize for the insensitive remarks, I had no racial intentions with those remarks at all. I’m not like that at all,” Gruden told reporters. “I don’t want to keep addressing it.”

It was previously reported that the NFL would not exact punishment in the direction of the Super Bowl-winning head coach. After all, he was not in the league at the time the emails in question were sent.

Among other things, the emails read DeMaurice Smith has “lips the sizer of Michellin tires.”

Some recent suggestions conclude that the NFL is waiting for Las Vegas’ brass to act. Based on recent comments from owner Mark Davis, there’s a chance that might happen.

In terms of this new information, it’s important to wait and see what the content of the emails were before drawing a conclusion. But the simple fact that the NFL has sent them to the Raiders’ organization could tell us a story.

This is a developing story with Jon Gruden pretty much now on the hot seat. On the field, his Raiders have lost two consecutive games since a surprising 3-0 start to the season. They are set to take on the Denver Broncos next week on the road. Whether Gruden is on the sideline remains to be seen.