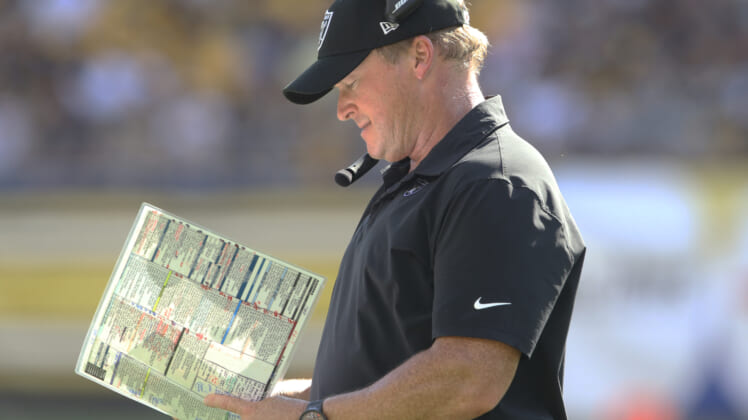 Jon Gruden and the Las Vegas Raiders dropped a stinker at home to the Chicago Bears on Sunday by the score of 20-9.

The game itself seemed to show an uninspired Raiders squad coming off their first loss of the season. It also kicked off mere days after Gruden himself made news for all the wrong reasons due to a racist remark he directed at NFLPA Executive Director DeMaurice Smith when he was a member of ESPN back in 2011.

A report released by The Wall Street Journal late last week depicts an email sent by Jon Gruden to then Washington Football Team executive Bruce Allen saying that Smith had “lips the sizer of Michellin tires.”

Following the game, Gruden once again touched on the topic and apologized to Mr. Smith.

“I am not a racist. I can’t tell you how sick I am. I apologize again to De Smith. But I feel good about who I am and what I’ve done my entire life. I apologize for the insensitive remarks, I had no racial intentions with those remarks at all. I’m not like that at all,” Gruden told reporters. “I don’t want to keep addressing it.”

Gruden’s comments come amid other reports indicating that those within power in the NFL will discuss the matter in New York City on Monday. Per Mike Florio of Pro Football Talk, the belief is that Gruden will not be suspended by the NFL.

What Raiders owner Mark Davis might do is not yet known. He made it clear late last week that the comments were not acceptable.

Related: Find out where the Las Vegas Raiders stand in our most-recent NFL power rankings

Regardless of our opinion regarding this situation, it must be noted that Gruden was not an employee of the Raiders when he made those racially-charged comments.

Even then, this is an organization that has defined itself by being being more inclusive than others. That includes hiring the first African-American head coach in NFL history and taking the first black quarterback in the first round of the NFL Draft.

It will be interesting to see what comes of this from the Raiders’ perspective moving forward. For now, Jon Gruden would like to put the whole thing to rest.