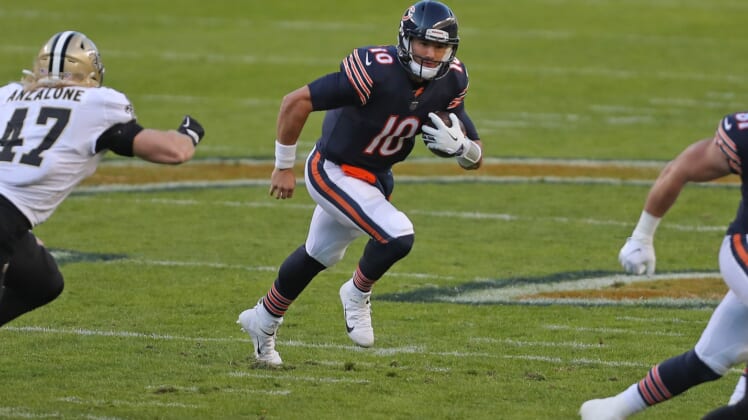 The Chicago Bears have named Mitch Trubisky their starting quarterback over the injured Nick Foles for Sunday’s Week 12 NFC North showdown with the Green Bay Packers. This could be the beginning of an epic Trubisky redemption story — if Bears coach and apparent offensive guru Matt Nagy uses him properly.

What’s that supposed to mean? Well, it’s apparent that no matter who’s been under center in 2020 for Chicago, Nagy hasn’t gotten the offense to produce, scoring only 19.1 points per game. Whether it be the maligned draft bust Trubisky or the maddeningly inconsistent Super Bowl MVP Foles, nothing is really working thus far.

Nothing about this situation is beyond saving, though. Some fairly straightforward adjustments could help Trubisky overtake Foles for good atop the QB depth chart.

Mitch Trubisky has his shot, will start over Nick Foles in Week 12

News of Trubisky’s return to the starting lineup surfaced from the Bears’ official Twitter account on Friday. Foles was forced out of action in Week 10 due to a hip injury that wasn’t considered a major ailment at the time. But even a bye week wasn’t enough time for Foles to recover enough to get the starting nod, opening the door for Trubisky.

Look, it’s never going to be pretty when evaluating Trubisky compared to his draft classmates Patrick Mahomes and Deshaun Watson. Those are arguably the two best quarterbacks in the NFL right now, depending how much you value what Watson is doing with an interim coach and a broken Houston defense.

But back to Trubisky: he is what he is at this juncture. Due to his one year of starting collegiate experience at North Carolina, he’s been behind the curve constantly in the NFL. As a result, Trubisky struggles to throw with anticipation, doesn’t trust his reads unless he can see the receiver break open, and his issues are exacerbated when pass protection isn’t ideal.

This is where alleged genius play-caller Nagy must step up, and spark the running game with Trubisky as a means of keeping Rodgers and the Packers offense off the field this Sunday night at Lambeau Field.

Nagy has tried everything to get Chicago’s putrid rushing attack going, but has failed. What’s the harm in letting Trubisky be more of a ball-carrier this Sunday against Green Bay?

We all know if you get physical with the Packers, they fold like a cheap suit. It happened in the NFC Championship Game against the 49ers, as San Francisco racked up 285 yards and four rushing scores on the way to a 37-20 triumph. The Cheeseheads did nary anything in the offseason to address those shortcomings on the front seven, and got gashed by Dalvin Cook for three touchdowns in a Week 8 loss.

Green Bay is 13th in rush defense, primarily because superstar quarterback Aaron Rodgers has put them so far ahead in many games that the opponents abandon running and try to throw to catch up. The difference entering Week 12 is the Bears actually have a formidable defense that can stand up to Rodgers and Co., thanks largely to the presence of stud edge-rusher Khalil Mack. That unit will give Chicago at least a fighting chance if the offense can do anything.

In 2020, the Bears are DFL in the NFL with 78.2 yards per game on the ground — a devastating quality for any postseason hopeful to have.

Flash back to Trubisky’s best year, 2018, when the team went 12-4 and won the NFC North. A combination of scrambles and designed runs saw Trubisky roll up 421 yards rushing and three touchdowns on the ground. It’s not a coincidence that was also his best season as a passer, as he threw for 24 scores to just 12 interceptions and logged a respectable 95.3 passer rating.

Were the reads simplified? Yes. Did Nagy’s play design set Trubisky up for success? Yes. It’s time to revisit those tactics as a means of giving the Bears life. The statuesque Foles can’t run zone-read option plays. Even if Trubisky doesn’t tuck and run often, he’d at least be a threat to keep the ball and scamper for chunk plays to ignite the offense.

Mitch Trubisky: A lame duck who brings hope on 3rd down

Bear in mind that Trubisky is a lame duck. He’s being counted out as a bust — and frankly, it’s justified. Chicago declined his fifth-year contract option. The 26-year-old has fresh legs after riding the bench for a prolonged period of time. Maybe the game has slowed down for him now that he’s had more time to sit and learn.

Think about it: Trubisky is going to be fired up to be back out there. He’s taken as much criticism as any pro athlete who’s played in a big market in recent years. Nagy could run him numerous times on Sunday, and on the unfortunate chance he gets hurt, Foles is probably back in the saddle for Week 13. For someone who craves creative play design to the extent Nagy does, this is a chance for him to paint his masterpiece.

Even if plays break down, Foles doesn’t have the mobility that Trubisky shows here to make something positive happen:

Situational football is key. Notice there, it’s 3rd and 6. It’s an instance wherein a mobile passer can buy time with his feet, keep his eyes downfield and rip off a chunk play. You won’t be surprised to know the Bears are last in the NFL with a horrifying 31.11% conversion rate on third down — and are at 21.95% over the last three contests. That’s on Nagy and Foles.

Being behind the sticks due to bad rushing game plans is a big contributor to the Bears’ third-down woes. All the more reason to run with their returning starter at the most important position on the field.

Trubisky has shown he can excel as a ball-carrier in the aforementioned 2018 campaign and throughout his young NFL career. That’s about the only thing general manager Ryan Pace can point to as a consistently successful dimension of the Mitch Trubisky Era. Well, along with a 3-0 record as a starter this year, which could improve against Green Bay.

The Bears are on a four-game slide, yet still sit at 5-5 with a shot at the playoffs in the NFC. For Nagy, Trubisky and the entire front office who invested in the former No. 2 overall pick, Week 12’s division rivalry clash could be the beginning of a special run if the head coach actually plays to his signal-caller’s greatest strengths, rather than trying to impress the football world with his cutesy plays.

It’s a minor miracle Chicago is still ninth in total defense and sixth in points allowed per game with how bad the Bears are at running the ball and considering the team has a -3 turnover margin. Can Nagy trust Trubisky enough to run and open up play-action and run-pass option opportunities, potentially lifting spirits in the Windy City along the way? Sunday in prime time will be telling before two winnable games come up against Detroit and Houston.