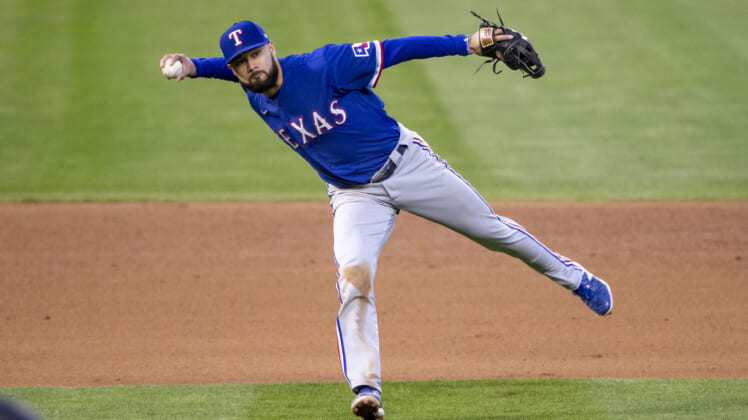 The baseball world has already gotten their first post-MLB lockout trade. According to Jeff Passan of ESPN, the Minnesota Twins are trading Mitch “Garv-Sauce” Garver to the Texas Rangers for shortstop/third baseman Isiah Kiner-Falefa plus starting pitching prospect Ronny Henriquez.

Garver was set to once again split catching duties with Ryan Jeffers, but now presumably that job is his for the taking. Meanwhile, Kiner-Falefa is expected to immediately step in as the starting shortstop for the Twins, forming a middle infield duo with Jorge Polanco at second base.

What are the Minnesota Twins getting in the trade?

Isiah Kiner-Falefa was one of the better defensive shortstops last season, being credited with 10 Defensive Runs Saved across 158 games. He is soon to be 27-years-old and offers some additional versatility, being able to play third base and a bit of catcher as well. But he’s fully expected to play short for the Twins.

There were just two shortstops who had more DRS than Kiner-Falefa did a season ago, with Carlos Correa saving 19 runs and former Twin Andrelton Simmons preventing 15 runs from scoring thanks to their defensive expertise.

While IKF is superb with the glove, his bat doesn’t come close to what Garver offered the past few seasons. Internally, the hope is that Jeffers can continue to develop at the plate.

As far as the starting pitching prospect, Ronny Henriquez was the 15th ranked prospect in the Rangers’ system and he finished his season Double-A a year ago. He is just 21 years old.

Here’s a detailed scouting report on what to expect from Minnesota’s newest pitching prospect.

How does this trade impact the Texas Rangers?

The Rangers are losing Kiner-Falefa who was expected to be their starting third baseman, but they are adding a new starting catcher, one who has a lot of pop. In 2018, Garver won the Silver Slugger award for catchers, after hitting 31 home runs. While he only managed to hit 13 longballs a season ago, Garver is 30 years old and should have plenty of tread on his tires.

Garver was well-liked in Minnesota, but he should fit in well with the Rangers as their starting catcher.