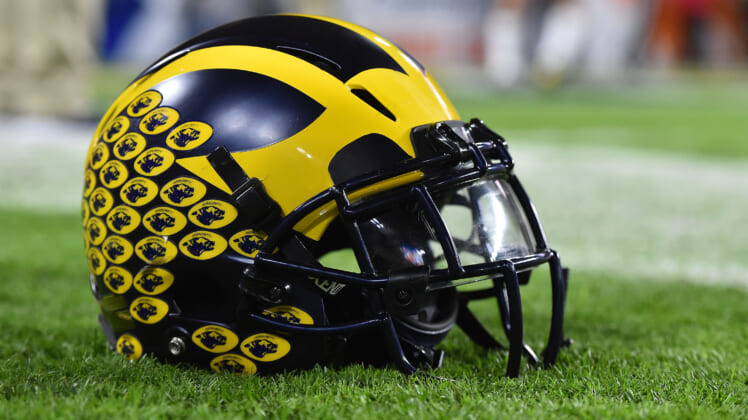 The Michigan Wolverines finally returned to glory in 2021, winning their first Big Ten Conference title since 2004 and earning their first College Football Playoff. But with Him Harbaugh nearing an NFL return, a new Michigan coaching search could be imminent.

Everything came together for the Wolverines in 2021. Changes to the coaching staff led to a 12-win season, including a monumental victory over Ohio State. While the Wolverines lost in the CFP Semifinal, it served as a point that many thought would motivate this team heading into 2022.

Michigan is near the top of 2022 college football rankings, even with plenty of its talent headed to the NFL. It’s why Harbaugh departing his alma mater would be jolting for the program.

There is already some damage being done by Harbaugh dragging this out, leaving the Michigan Wolverines in flux. But if he ultimately bolts, it could lead to numerous transfers and decommitments. But hiring the right coach might lessen the blow.

After seeing the success both Penn State and Alabama’s receivers had with Gattis and his work coordinating offenses, Harbaugh brought him to Michigan. In his third year, with more stable quarterback play, Gattis won the Broyles Award and generated some coaching buzz.

If the Wolverines want to maintain continuity, Gattis is the hire. He’s earned a promotion and naming him head coach would also open the door for running backs coach Mike Hart to become offensive coordinator. If Harbaugh leaves, this process would ease concerns for the 2022 season.

If you’re going to lose one of the best coaches in college football, replace him with another. The Iowa State Cyclones are far from a powerhouse program, but Campbell turned this team into a consistent winner. Making $4 million in 2021, the Ohio native is a three-time Big 12 Coach of the Year and is ready for the jump to a marquee school.

The 42-year-old receives rave reviews for his leadership and ability to get players to buy in and play at their best. If Harbaugh departs, those qualities are essential for the next Michigan Wolverines head coach. Campbell could retain Gattis as offensive coordinator or bring his own staff Ann Arbor. Not only would it be an upgrade for Campbell, but he’d also likely become one of the highest-paid college football coaches in 2022.

Money changes minds. While the Carolina Panthers kept head coach Matt Rhule, there’s always the possibility the right opportunity could change things. A firing won’t happen since Carolina just hired Ben McAdoo as its offensive coordinator. But Rhule is keenly aware of the mounting pressure he is facing in the NFL. He could return to college football after being fired next season, but there are no guarantees a blue blood program is looking for a new head coach.

While Rhule seems destined to become the next college-to-NFL coaching busting, there’s no denying his success at the lower level. After an 8-16 combined record in his first two seasons at Temple, the Owls went 20-7 in the next two years. It remains Temple’s only double-digit win seasons since 1979.

This is the kind of job that could at least make Rhule think about returning to college football. The Wolverines have the resources to win immediately and maintaining the level of success would be far easier than at Baylor. If Rhule waits, jobs like Nebraska, Stanford and Florida State might be the best options in 2023.

There is no greater divide in football than the split opinions on Bill O’Brien. He’s beloved by coaches and executives at both the collegiate and NFL levels. Pursued by NFL teams seeking an offensive coordinator and viewed as a collegiate head coach candidate, fans aren’t pleased when O’Brien is mentioned. That would likely be the case if his name pops up in a potential Michigan Wolverines coaching search.

The 52-year-old coach does have a resume worth examining. After working under Bill Belichick (2007-’11), O’Brien took over as the Penn State head coach in 2012. The Nittany Lions went 15-9 in two seasons, a remarkable achievement considering he replaced Joe Paterno and a majority of Penn State’s talent bailed after the Jerry Sandusky revelations.

O’Brien went 52-48 as an NFL head coach, delivering five winning seasons for the Houston Texans across seven years. He’s received praise from players for his work ethic, develops strong relationships with his quarterback and reigning Heisman Trophy winner Bryce Young credits O’Brien for a lot of his success.

For all those reasons, he’d become a viable Michigan Wolverines coaching candidate. The Wolverines could feel confident he’d help Cade McNamara and JJ McCarthy, stabilizing the team’s present and long-term hopes at quarterback. But O’Brien is still thinking about the NFL and that could lead to him abandoning the Wolverines at any point in the future. If Harbaugh abrupts right when things started trending up, Michigan would risk the same fate with O’Brien.

Just 15 years after delivering three 1,000-yard seasons for the Michigan Wolverines, Mike Hart could replace Jim Harbaugh. The 35-year-old didn’t last long in the NFL (2008-’10), but he immediately found a home as a coach. It began at Eastern Michigan, but he quickly moved up the ladder as a running backs coach with stops at Eastern Michigan, Western Michigan, Syracuse and Indiana.

Hart might not be the most popular candidate among fans, given he’s never even served as an offensive coordinator. But there’s a reason he generated buzz before Harbaugh even left. Hart is crucial to Michigan’s recruiting and that was evident in just his first season back with the Wolverines. On the field, Hassan Haskins and Blake Corum combined for 2,279 rushing yards and 31 rushing touchdowns thanks to Hart’s coaching.

If Harbaugh leaves, the best-case scenario is Gattis being promoted to head coach with Hart taking over as offensive coordinator. But if Gattis leaves with Harbaugh, there’s a real shot Hart is the next Michigan Wolverines head coach.