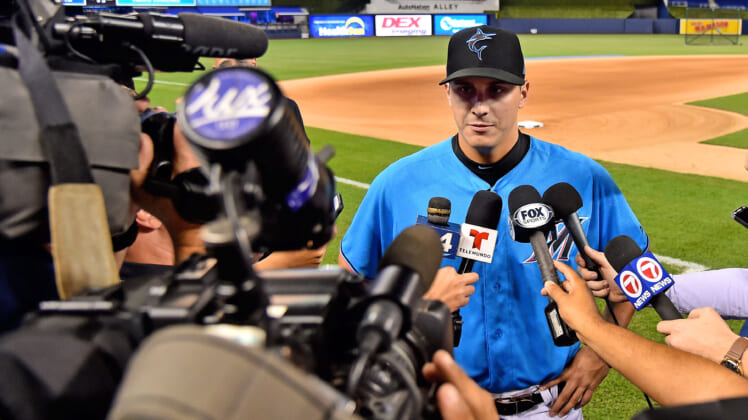 The Miami Marlins haven’t had a great season, and that’s unlikely to change in the second half of the year. Being 10+ games behind the New York Mets for the NL East division lead, it wouldn’t surprise anyone to see manager Don Mattingly prioritize giving younger athletes more playing time. One who could benefit from this approach is JJ Bleday, the team’s first-round pick from 2019.

Unfortunately, Jorge Soler just hit the 10-day injured list due to experiencing back spasms, and even if he was fully healthy, there’s no guarantee he’s a long-term fit on the roster. Soler is 30 years old and has an opt-out clause in his contract for next season, but stands to make $15 million if he keeps his current contract.

Thanks to the immediate uncertainty of Soler’s playing status, the Marlins had a need for another outfielder. Bleday, the fourth overall pick three years ago, is getting the call.

According to Jordan McPherson, the Marlins have promoted Bleday to the major leagues, and he’s set to make his MLB debut during this weekend’s series against the Pittsburgh Pirates. Bleday is not in the lineup on Saturday, but he could be available off the bench. His first start is likely to come on Sunday, taking on right-handed pitcher Mitch Keller, who has a 4.55 ERA in 89 innings this season.

While the major leagues have yet to see Bleday, we have plenty of intel on the 24-year-old left-handed hitter from his time in the minor leagues. Let’s dive into what Marlins fans can expect to see out of the newest face in the clubhouse.

The first thing to know about JJ Bleday is that he’s the fourth-ranked prospect in the Marlins’ MLB top-30 list. He’s the second-highest-ranked position player in the Marlins’ organization, and according to MLB.com, he’s ready for the pros, with 2022 being the year he was expected to make his debut.

After socking 20 home runs across 302 at-bats at the AAA level, Soler’s injury gives Bleday a chance to take his first swings against major league competition on an everyday basis.

The former Vanderbilt star brings a strong arm, and a plus hit tool that should be able to hit for power and average. Though, it should be noted that Bleday’s hit just .225 at the minor league levels thus far.

Bleday is given a 55 scouting grade when it comes to his hitting, but his 60 arm grade stands out even further as his best attribute. He also has experience playing in center, but his lack of elite speed makes him a better fit for the corner outfield spots, which he can hold down just fine.

Yet, there’s plenty of room for growth, and the power is promising for now. Especially when considering he’s replacing Soler, who brings a similar skillset. Like we’ve seen from many other top prospects who get their first taste of professional pitching, Bleday may not thrive right away with the Marlins, but getting some at-bats now should only help his long-term outlook. At least now he’ll know what to expect, and what he needs to improve to stick around for good.

Who knows? Maybe Bleday can bring the same pop he’s brought at the Triple-A level to the big leagues. If so, Marlins fans might see his name penciled into the starting lineup, starting in right field more often than not.