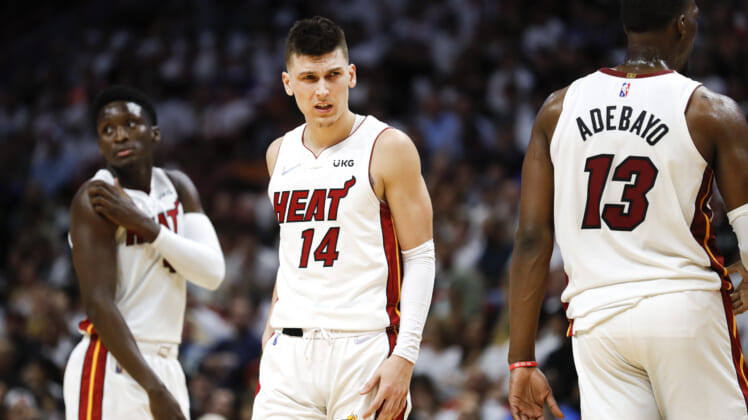 The Miami Heat hosted the Philadelphia 76ers in Game 1 of their Eastern Conference Semifinals series in South Beach Monday evening.

Miami entered the series as overwhelming favorites given the injury to 76ers star center and NBA MVP candidate Joel Embiid.

While the Heat did end up going cold in the second quarter (20 points), they played great on both ends of the court in what ended up being a dominating 106-92 win. That included Jimmy Butler and Co. outscoring Philadelphia 56-41 in the second half.

Below, we look at the four biggest takeaways from the Miami Heat defeating the Philadelphia 76ers by 14 points in Game 1 of their second-round NBA Playoff series.

You’re not going to replace the production that Embiid brings on both ends of the court. We’re talking about the reigning NBA scoring champ and the single most-dominant center in the NBA since Dwight Howard was in his prime.

With that said, Philadelphia needed something from Jordan after he played less than a minute in his only Round 1 appearance. In no way did that come to fruition. Jordan finished with four points in 17 minutes of action. Philadelphia was outscored by a whopping 22 points during that span.

The first half was especially terrible with the 76ers finishing minus-12 in Jordan’s four minutes and plus-13 when he was rightfully riding the pine. Philadelphia put Paul Millsap in for six minutes to see if he could provide anything on the low-post. He made no impact. The takeaway here is that Philadelphia is pretty much screwed until Embiid returns. It has no one to compete with Bam Adebayo.

Miami knew that it had a plus-level matchup inside with Embiid sidelined. Boy, did Bam take advantage of that after a so-so first-round appearance saw him average a mere 12.4 points against the Atlanta Hawks. That was not the case in the series opener.

Tyler Herro rebounds for Miami Heat after terrible Round 1 performance

One of our biggest keys heading into this series for the Miami Heat was the team’s second-leading scorer during the regular season. Herro was tremendous as a sixth man, averaging 20.7 points on 40% shooting from distance. Herro did not provide this against Atlanta — averaging 12.8 points on a laughable 18% mark from three-point range.

Herro had FTX Arena in South Beach rocking throughout Monday night’s series opener. The dude just had that “it” feeling to him as we saw throughout the regular season. Herro scored 25 points on 9-of-17 shooting. He also connected on 4-of-6 from distance while dishing out seven assists in 29 minutes.

Miami will be nearly unstoppable moving forward in this series if the leader of its bench continues to perform at this level. It really is as simple as that.

James Harden is not a No. 1 option for the Philadelphia 76ers

“I just have to be more aggressive. I’ve been doing this — I’m comfortable and have been doing this for a long time. Just taking what the defense gives me and being aggressive, and making the right decision once I get to that point. More floor spacing and more attacks to the basket. We just have to play free — free and with the ultimate confidence as a group.”

About that? Harden connected on just 5-of-13 from the field while turning the ball over five times in what was another terrible performance from the former NBA MVP. He continued struggling finishing at the rim and couldn’t hit from the outside (2-of-7 from distance).

Outside of his performance in a series-clinching Game 6 win ove the Toronto Raptors in Round 1, this is what we’ve seen from Harden since being dealt to the Philadelphia 76ers. In the first five games of said series, Harden averaged a mere 18.4 points on 37% shooting. We’re now at the point where we have to wonder whether Harden is simply a shell of his former self at 32 years old.