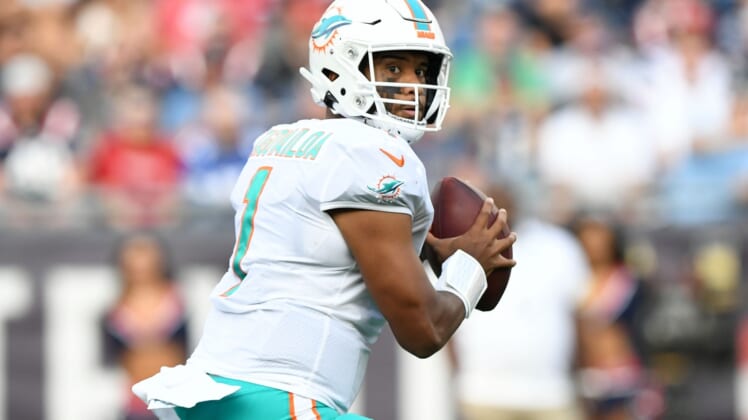 Tua Tagovailoa passed for 202 yards and a go-ahead three-yard touchdown to rookie Jaylen Waddle as the Miami Dolphins spoiled Patriots quarterback Mac Jones’ NFL debut with a 17-16 win over host New England in the season opener on Sunday afternoon.

Waddle, the No. 6 overall pick in this year’s draft, grabbed his first career touchdown catch with 10:51 remaining in the third quarter to put Miami on top for good at 17-10. Nick Folk’s 42-yard field goal with 2:50 left in the third and another from 33 yards out at 10:36 of the fourth pulled New England within 17-16.

Tagovailoa, who also had a rushing touchdown, finished 16-for-27 passing and was also intercepted by New England defensive back Jonathan Jones with 8:07 to play in the fourth. Mac Jones and the Patriots drove 41 yards before running back Damien Harris lost a fumble at the Dolphins’ 11-yard line.

Mac Jones, the No. 15 overall pick in this year’s draft, completed 29 of 39 passes for 281 yards and a touchdown in his pro debut. Harris rushed for 100 yards on 23 carries and Nelson Agholor made five catches for 72 yards and a score for New England (0-1).

Miami and New England were tied 10-10 at halftime.

Tagovailoa capped a 10-play, 80-yard opening drive with a three-yard TD run off the right tackle to put the Dolphins up 7-0 with 5:29 to play in the first quarter. Folk kicked a 27-yard field goal to put the Patriots on the board at 10:17 of the second.

Jones connected with Agholor for his first career touchdown pass with 2:30 left in the half to put New England ahead 10-7. The rookie faked a handoff to Harris before firing a seven-yard strike to Agholor.

Jones and Tagovailoa were teammates at the University of Alabama. Tagovailoa led the Crimson Tide to a national championship in the 2017 season and Jones guided the program to its 18th title last season.