It may be a matter of time before the New York Mets have two men named Francisco starring in everyday roles in Flushing.

One of the 10 best players in the MLB minor leagues is currently playing for the Mets Double-A affiliate Binghamton Rumble Ponies. Francisco Alvarez is currently the team’s starting catcher and has quickly made his way through the franchise’s farm system to become the organization’s top prospect.

While catcher is always an important position and developing a long-term option is a priority for every franchise, Alvarez has shown can’t miss potential because of the elite level hitting he has displayed during his career. And that has continued over the first few games of his 2022 minor league campaign.

So far this season the Venezuelan has been in a full-on Hulk-smash mode against opposing pitchers. In 31 at-bats, he has 11 hits, four home runs, 12 runs-batted-in, and eight runs scored. His slash line (via Milb.com) following the team’s Wednesday win over the Portland Sea Dogs is ridiculous. Right now he has a .355 batting average, a .432 on-base percentage, and an out-of-this-world 1.303 slugging percentage.

With hitting like that, he will not be staying in Binghampton much longer. The question is, how long will he even stay in Triple-A if he keeps this up? During a recent chat with the team’s broadcast network, former Mets general manager, and current SNY analyst, Jim Duquette lauded Francisco Alvarez’s talents and even compared him to team great David Wright. However, he did pour a bit of cold water on the possibility of Alvarez playing in Citi Field in 2022.

“He has a 1.000 slugging percentage right now. If he keeps hitting like that it’s hard to keep him in the minor leagues,” Duquette said. “But he is only 20-years-old and he’s at Double-A. You’d like to see him get an opportunity at the Triple-A level and swing the bat that way.”

“I remember when we had David Wright, David started in High-A ball, then he got to Double-A, then he got to Triple-A for just a month, and we brought him up late in the year. I wouldn’t rule that out, but I think more realistically you’d be looking at him here next year in 2023. He needs work on framing, receiving, all those things,” ex explained. “It’s hard to bring a catcher up in the middle of a pennant race. You can’t really hide him.”

Hopefully, the Mets’ league-leading payroll lives up to expectations and they don’t need Alvarez this season. Nevertheless, the organization very well may have the next Mike Piazza in the minor league pipeline. 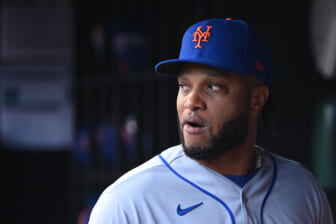