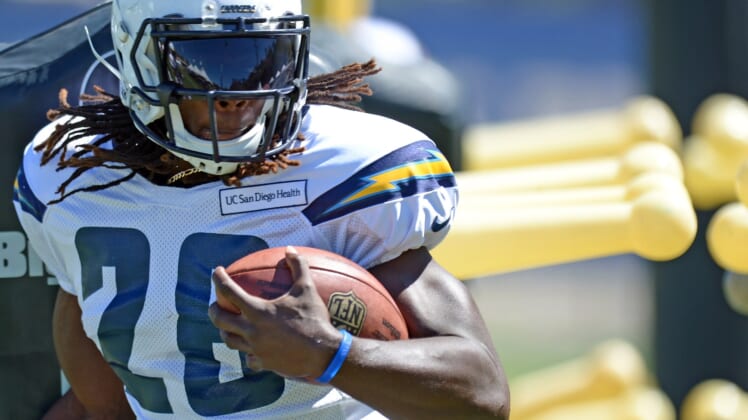 Melvin Gordon has stated through his agent Damarius Bilbo that he will demand a trade and will not report to training camp without a new contract extension.

“He’s very serious,” Bilbo said. “He’s worked his butt off and the fifth-year option is a result of where he was drafted. It’s what it is. But if we’d gotten a respectable offer, we wouldn’t be here. But he felt disrespected. He’s very serious.”

The Chargers offered an extension that Gordon and his representatives feel is “disrespectful” because of his production.

To be fair, he has a brilliant resume since the 2016 season.

From his perspective, the timing of this demand for a market-value contract seems perfect. The Los Angeles Chargers open training camp in a couple of weeks, and deadlines force action.

Unfortunately, the timing is actually really not in his favor from a league-wide perspective.

It all starts with Todd Gurley: Gurley signed a record-breaking deal with the Los Angeles Rams nearly a year ago.

They represent four of the top-10 contracts for NFL running backs in terms of guaranteed cash. However, it’s worth pointing out that the best among them, and one of the best in the NFL, is having issues getting an extension with a team that actually has stated it wants to work out a deal.

While all of these high draft picks have been productive for their teams when healthy, it’s worth pointing out that they are still relatively young, and that there are few older running backs landing big-money deals these days.

Veterans among the top-10: Looking at the other big-money running backs in the NFL outside of first-round picks on their rookie deals, it’s hard to say the contracts have been justified.

Of the six top-paid running backs in the NFL who are veterans not still on their high-priced rookie deals, it’s debatable if any of them are worth the money they are getting paid.

One would assume, based on his previous production, that Bell could be worth it.

McCoy is the only one we can definitively say was worth it — until last season. And at this point we really don’t know what he has left any more.

Back to Melvin Gordon: The Chargers running back wants to land at least one big-money contract before his wheels fall off, and it’s hard to blame him for that. However, despite his tremendous production the past three seasons, he isn’t without significant risk.

Furthermore, as productive as Gordon has been, the Chargers have a couple of other running backs they could certainly get by with, if Gordon plays hardball and sits out the season.

Finally, despite the recent run on first-round running backs around the league, the NFL still at its heart views running backs as a relatively cheap commodity.

The bottom line: In short, there is extreme risk associated with giving an oft-injured running back a ton of guaranteed money. The other veterans who have landed big contracts recently attest to that. On top of that, teams can also pick up production at this position for very cheap.

Gordon is a darn good running back who has a nose for the end zone, but he isn’t a generational talent. With that in mind, we’d be shocked if the Chargers gave Gordon what he wants.