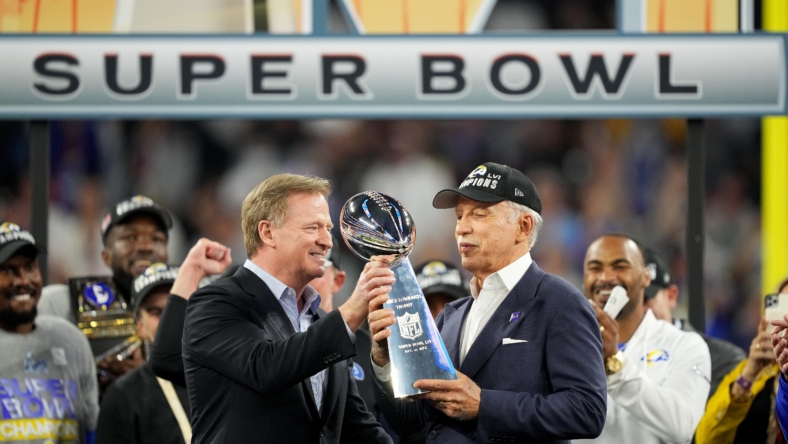 The Los Angeles Rams are just seven months removed from winning Super Bowl LVI in their home arena, which is the state-of-the-art SoFi Stadium that only recently opened in 2020. Despite SoFi being one of the best football stadiums in the NFL, with a construction cost estimated to be in the range of $5 or $6 billion, the team is still fascinated with playing at other locations.

And we’re not just talking about going on the road for a game at AT&T Stadium or U.S. Bank, some of the finest stadiums in football.

Instead, the Rams are reportedly “bullish” on someday playing a football game in the country of Australia, which is located over 8,000 miles away from their home base in Inglewood, California.

While no reason is given for why Australia specifically sticks out to the Rams, it’s not hard to envision the NFL finding great success where other sports, such as soccer and rugby, are so popular.

Perhaps another driving force behind this interesting development is thanks to team owner Stan Kroenke, who also owns the Arsenal soccer team, located in London. In other words, he’s seen firsthand just how passionate fans all around the world can be. Maybe that’s what he’s trying to bring to Australia as well.

Who knows who or what the grand scheme here is, but while the NFL has successfully brought its brand to countries such as England, Germany, and Mexico, maybe Australia will be the next to join the fun.

In Week 10, we saw Germany host the Tampa Bay Buccaneers and Seattle Seahawks, and in Week 11, we’ll see Mexico host the San Francisco 49ers and Arizona Cardinals, but it may not be long before the Rams are heading overseas to play a game on the pitch in Australia as well.