The Los Angeles Rams will have to make some tough decisions if they hope to turn around a terrible showing in 2022-2023, and that could include trading off one of their best players in the offseason.

On the heels of winning the franchise’s second Super Bowl title, the Los Angeles Rams ended up having one of their worst seasons during the last decade. Despite many of the key ingredients from last season’s championship team returning, the Rams stumbled and limped their way to a shocking 5-12 finish in ’22-’23.

Certainly, season-ending injuries to starting quarterback Matthew Stafford and superstar receiver Cooper Kupp had a monumental effect on their performance. But even when those two men were healthy, this year’s Los Angeles Rams team seemed far removed from the group that stormed through the NFC West and to Super Bowl LVI earlier this year.

However, the organization has serious limitations in making major changes to the roster next season. They traded off quite a few of their key assets in upcoming drafts, and the team is well over the salary cap heading into the new league year. To gain some flexibility and make moves, it looks like the team will have to ship off one of their elite defensive stars.

Last week, five-time Pro Bowler Jalen Ramsey made a comment on his Twitter account that seemed to insinuate his time in LA could be at an end after two seasons. Well, there is fire behind the All-Pro’s smoke.

In a Wednesday column, Washington Post NFL insider Jason La Canfora reported on various news around the league. One tidbit was on rumblings that Ramsey and Arizona Cardinals star receiver DeAndre Hopkins could be on the move. In his report, La Canfora gave a definitive update on those rumors and some bad news for fans of those franchises.

“It’s a matter of when Rams star cornerback Jalen Ramsey and Arizona Cardinals star wide receiver DeAndre Hopkins are traded, not if. And the GMs I have spoken to don’t believe those teams will get anywhere near the compensation that their fans might expect.”

Jalen Ramsey is signed for three more seasons at $17, $14.5, and $15 million, respectively. While there is an out in his contract, it isn’t until after the 2023 season. Meaning cutting him outright would have little benefit for the Los Angeles Rams. 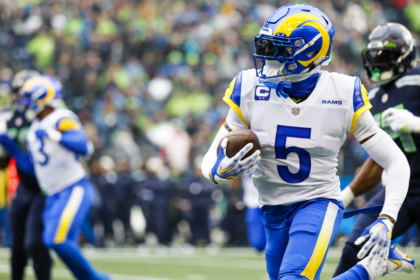 However, teams around the league also know they have hardly any leverage in a trade since they need to move his contract to free up some much-needed space for future draft pick contracts and free agents in the spring.