A new report claims the Los Angeles Lakers would be open to giving up two unprotected first-round picks to acquire star Kyrie Iriving, however, it still may not be enough for the Brooklyn Nets.

Irving is one of the most talented players in the NBA. However, his personality and recent career choices have severely damaged his value around the league. He took himself out of a winning situation with the Boston Celtics to join Kevin Durant in Brooklyn. He then pushed the team to fire head coach Kenny Atkinson two seasons ago and recently sought out a pay raise this summer despite missing much of last season due to his unwillingness to get vaccinated for COVID-19.

In spite of his elite gifts on the court, few teams around the league have been interested in acquiring him this summer as the relationship between Irving and the Nets has hit an all-time low. That is most teams outside of the Lakers. LA is the only organization that has actively tried to trade for the 30-year-old to no avail.

Previous reports suggested the team’s unwillingness to give up more than one future first-round pick was the big hold-up in a deal. However, ESPN NBA insider Adrian Wojnarowski revealed on a Thursday edition of “Sportscenter” that the Lakers are open to moving two unprotected firsts and that those selections give the team solid trade chips. However, those two chips don’t have quite the same value in the eyes of the Nets front office. 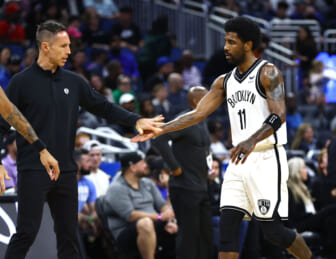 Rumblings out of Brooklyn suggest the Nets still hope to have Irving and disgruntled scoring machine Kevin Durant in their uniform in 2022. They may exhaust that possibility to the bitter end.