The growing schism between the Nets and superstar Kevin Durant has been the biggest story in the NBA offseason. The question of where he could be traded or if it will even happen has raged on for over a month. But just when things seemed to be quiet on the Brooklyn front, there was a new explosion of news on Monday when it was revealed that Durant gave Nets governor Joe Tsai the ultimatum of it’s either him or the team’s coach and GM combo. Tsai can’t have both in 2022.

The news led to a tweet of support from Tsai for the organization’s decision-makers and relit the speculation fires of a Kevin Durant trade happening at some point this summer. Well, it seems that fellow superstar Kyrie Irving is also no fan of Nash and Marks.

On a Monday night story about the ongoing drama between Durant and the Nets, the New York Post disclosed some new details on Irving’s opinion of his Hall-of-Fame head coach and GM.

The revelation that Irving is unhappy with one of his head coaches is a bit of a tradition for him. In 2019, there were reports that the seven-time All-Star had “issues” with Boston Celtics head coach Brad Stevens and then team president Danny Ainge. 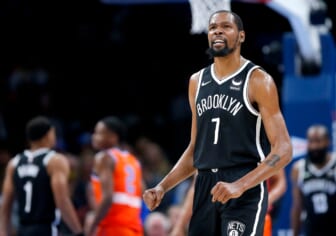 After just one season under former Nets head coach Kenny Atkinson, the 30-year-old also tired of the current Golden State Warriors assistant’s coaching style and forced his dismissal from the job he had for four seasons. Which included a rebuild and getting the Nets back into the playoffs for the first time and several seasons.