One of the biggest stories of last week’s NBA trade deadline was the Los Angeles Lakers’ lack of activity. They made exactly zero trades with the team struggling big time leading up to the annual event.

More than anything, most figured that Los Angeles couldn’t pull off a trade because it had very little assets in terms of both young players and draft picks.

NBA insider Ramona Shelburne of ESPN appeared on Brian Windhorst’s “The Hoop Collective” podcast recently to break it down. What she had to say was rather interesting.

It had to do with LeBron James and the Lakers’ core group of future Hall of Famers pushing for the team that Los Angeles currently has assembled and how they weren’t going to be bailed out.

“My interpretation was that the Lakers’ front office and ownership — the Lakers’ organization from ownership on down — decided, ‘You guys got yourselves into this; this is the bed that you made. LeBron James, Anthony Davis, Russell Westbrook, Carmelo Anthony, Dwight Howard, all of the future Hall-of-Famers: This was your choice of roster and team, go make it work. And we are not going to mortgage our future in terms of draft picks or taking on luxury tax now because this team isn’t working yet. Go make it work.”

This could easily be seen as a knock on James and his hand in player personnel matters dating back to the four-time champion’s first stint with the Cleveland Cavaliers. It’s hard to blame the Lakers’ brass for this.

Los Angeles headed into Wednesday’s action against the Utah Jazz with a 26-31 record and as the ninth seed in the Western Conference. The team has lost seven of nine and boasts a 5-12 record since a 21-19 start to the 2021-22 campaign.

Both James and Anthony Davis have been injury-plagued throughout the season. Right now, James is dealing with a knee injury that cost him five games recently. His recent comments on the injury don’t seem too positive in terms of a long-term impact moving forward on the season. 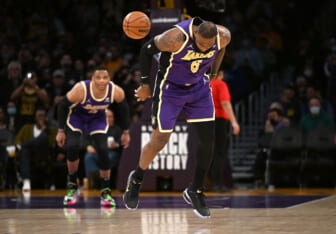 “It’s here. It’s the same as my ankle (last year). The only way it can get back to full strength is rest and I haven’t had the luxury of having rest,” LeBron James said earlier in the week.

The backdrop here is Russell Westbrook’s struggles in his first season with the Lakers after James and Davis pushed for the deal that led to him heading to Southern California from D.C. last summer. In reality, the Lakers’ aging core has simply looked old this season.

With LeBron James leading the charge, Los Angeles has yielded a ton of draft capital and young players to help build a championship-caliber roster. It led to an NBA title following the truncated 2019-20 regular season.

Since then, it’s been downhill for the Lakers. And in reality, they just don’t have the assets to help build a contender in the post-LeBron era.

Los Angeles was in talks with the Houston Rockets to move Westbrook and a 2027 first-round pick for John Wall. Said selection is the earliest they can trade following moves to acquire Anthony Davis, Dennis Schroder and Anthony Davis in recent years.

General manager Rob Pelinka and Co. have to be realistic about the situation. There’s no telling how many seasons James has left. There’s also been some suggestions that he might look to leave Los Angeles and join his son once Bronny enters the NBA a couple years down the road.

These Lakers are not championship contenders. They are actually closer to missing out on the play-in tournament altogether rather than earning a spot in the playoffs. No pre-trade deadline move with their current assets would have changed this reality.