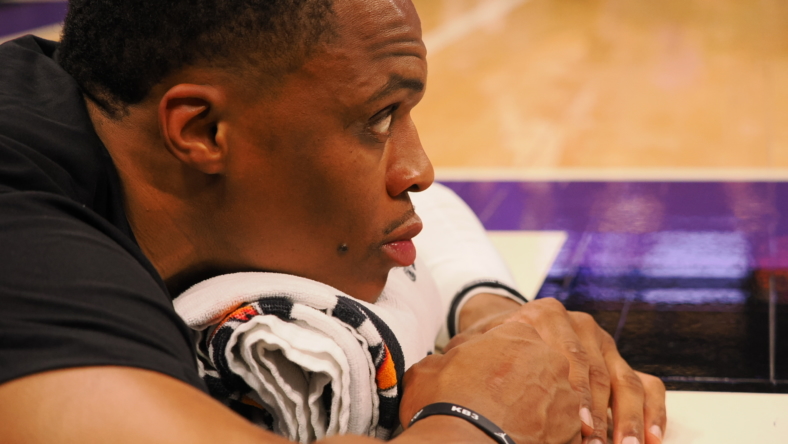 The Los Angeles Lakers find themselves at 0-3 on the season and in the midst of a stretch that has seen them lose 32 of 44 games dating back to last season.

For Westbrook, this was the latest example of just how far his star has fallen from earlier in his career. It’s also another representation of just how poorly he fits in with LeBron James and Anthony Davis in Southern California.

With the Lakers struggling, it’s no surprise that further reports are coming out about general manager Rob Pelinka and trade discussions he had with other teams ahead of the season.

According to Kevin O’Connor of The Ringer, Los Angeles offered up Westbrook, a first-round pick and multiple second-round selections to the Utah Jazz for a package surrounding Bojan Bogdanovic ahead of the start of the season.

Ultimately, Bogdanovic was dealt to the Detroit Pistons immediately ahead of opening day. But this gives us an idea about the Lakers’ feelings regarding Westbrook. Now, the question is what the Lakers might do from here.

“For now, the Lakers appear determined to give the current roster a proper sample size of 20-to-25 games and assess their needs,” The Athletic’s Shams Charania on Los Angeles Lakers’ trade plans.

This fits into the timeline suggested by ESPN’s Adrian Wojnarowski, who indicates that a trade involving Westbrook likely wouldn’t be discussed until after the Thanksgiving holiday. That’s about the same time free-agent signing Dennis Schroder is expected to return from injury.

This is the crux of the issue. At this point in his career, Westbrook provides no real value to teams around the NBA from an on-court perspective. That includes the Lakers after new head coach Darvin Ham opted to bench him in their most-recent game.

“We don’t have time for people to be in their feelings,” Ham after benching Westbrook on Sunday. Ham expanded on his issues with Westbrook shortly after the Portland loss, criticizing the guard’s late-game shot selection in the process.

With the Lakers up 102-101 and less than 30 seconds remaining Sunday night, Westbrook pulled up for a wing shot. He missed it terribly, setting up the Blazers’ game winner. While Russ indicated he was going for a two-for-one, it’s not a shot that has proven to have a high success rate given his shooting splits.

Assuming no other team really values Westbrook from an on-court perspective, moving him is going to be all about his contract.

The further we stretch into the 2022-23 season, the more valuable Westbrook’s expiring contract becomes. In turn, the Los Angeles Lakers might be able to flip him for shooters who are under contract beyond this season.

The aforementioned O’Connor did note that Los Angeles and Utah are expected to pick up in-season trade talks. That could include veterans such as Jordan Clarkson and Mike Conley heading to Los Angeles for Westbrook and multiple draft picks. Though, Utah’s surprising start to the season could impact this.

Either way, things are not going great in Southern California. Westbrook is a central figure in the struggles. And in reality, all of this could derail the Los Angeles Lakers’ season before it even really gets going.