The Carolina Panthers are the latest sports franchise to unveil alternate game-day equipment and theirs may be the best of the recent bunch.

Sports teams are always in search of ways to freshen up their product, especially if they can garner a boatload of new revenue in apparel with their brand and logo emblazoned on it. However, on occasion, some teams will offer up something that is more than just a money grab with a new look that is pretty freaking cool and worth showing some love toward.

On Tuesday, the Carolina Panthers did such a thing when they unveiled their new black helmets, which will surely be dubbed by the interwebs and social media as the “black panthers” gear. The helmet’s look, in general, is not a major departure in style from the team’s normal shining silver headgear.

However, in going with a simple black matte style the organization’s panther logo has an exciting new feel. Along with the classic black-and-blue jerseys the overall look is intimidating. Especially, with a tinted visor, as shown in the image above.

In an attempt to completely lean into the menacing new atmosphere the black helmets bring, the team made a short social media video that channels the spooky vibes of the “upside down” realm from the uber-popular Netflix show Stranger Things.

The Carolina Panthers will need all the advantages they can get in 2022. The team is not expected to compete for the NFC South title and very well could finish with a record similar to what they had last season at 5-12. 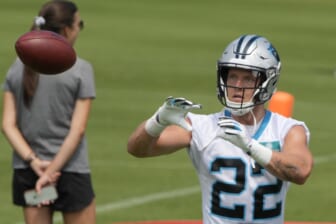 However, they did get a reason for optimism earlier this month when they made a deal for Heisman Trophy winner and former Cleveland Browns starter Baker Mayfield.