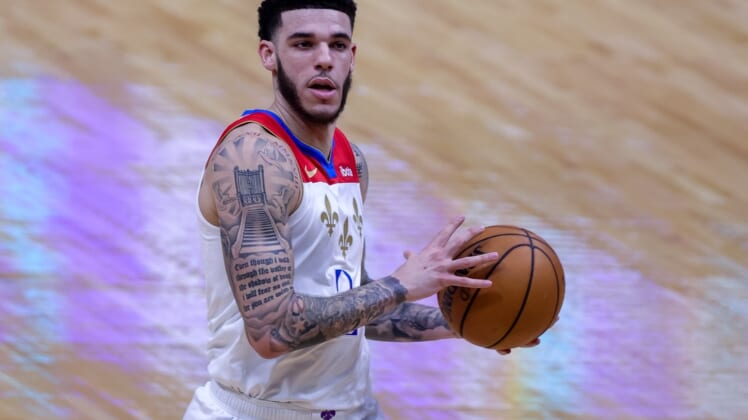 It’s not yet known whether the New Orleans Pelicans will trade star point guard Lonzo Ball. He’s been bandied about on the block leading up to Thursday’s NBA trade deadline.

For New Orleans, a potential Ball trade could make some sense. Despite being in the midst of a breakout season, the former Los Angeles Lakers No. 2 pick is slated to become a restricted free agent during the summer. It’s also not known whether he fits into the Pelicans’ long-term plans, especially with their core group struggling throughout the 2020-21 season.

We now have some more information on a potential Lonzo Ball trade. It has to do with his contract expectations for the coming NBA free agent period. It will also complicate things as it relates to a potential blockbuster here in the next few days.

“One source who has discussed the Lonzo dynamics with New Orleans said the 23-year-old guard is hoping to make approximately $20 million annually on his next deal,” Sam Amick of The Athletic reported on Monday.

Not only is an acquiring team going to have to take on the risk of losing Ball in free agency, said team would be on the hook for $20 million annually depending on how the Ball market dynamic plays out. Again, that’s a pretty big game-changer in the grand scheme of things.

Read More: A Lonzo Ball trade to the Golden State Warriors could be in the cards

Is Lonzo Ball worth $20 million annually?

If you had asked us this a few months ago, the answer would’ve been a resounding no. Despite showing some flashes on both ends of the court heading into the 2020-21 season, Ball was seen as an enigmatic figure.

In fact, he averaged 10.7 points, 6.1 rebounds and 6.6 assists on 39% shooting in stints with the Lakers and Pelicans over the course of his first three NBA seasons.

However, Ball has turned it around big time recently. He’s averaging 15.2 points, 4.4 rebounds and 6.3 assists on a studly 42% shooting from distance over the past 21 games. That type of recent performance might impact the haul New Orleans receives in a potential trade. Whether other teams view it as a large enough sample size remains to be seen.

That’s the million-dollar question right now. We already know that the surprising New York Knicks are interested in signing Ball as a free agent this coming summer. It’s possible that president Leon Rose looks to pull the trigger in order to have Ball in the mix for the stretch run.

Recent reports have linked Ball to the Chicago Bulls, Los Angeles Clippers and Atlanta Hawks in recent trade talks. As for the Clippers, they might not have the assets to pull off a trade without getting a third team involved. What we do know is that Los Angeles has been in the market for an upgrade at point guard over the past several months.

Obviously, the Golden State Warriors have also been linked to a Lonzo Ball trade throughout the 2020-21 season. Recent reports that the Warriors are open to moving Kelly Oubre before Thursday’s trade deadline adds another layer to that.

The question is now two-fold. How is the market going to play out for Ball within the next several hours? Is his reported contract demand going to scare off interested teams? Heck, there’s a chance that the Pelicans themselves expedite trade talks given Ball’s reported $20 million per-year asking price.