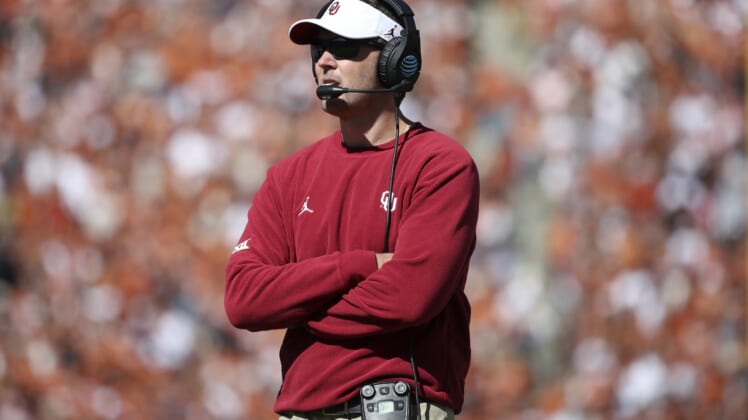 As the regular season nears its conclusion and some NFL teams make preparations for the offseason, other front offices have begun the process of finding their next head coach.

While the Carolina Panthers and Washington Redskins have already fired their head coaches, the NFL’s “Black Monday” after Week 17 will bring an even greater wave of change with multiple head coaches getting their walking papers.

It will mark the end for several coaches, but the job openings also present excellent opportunities for others. At a time when many teams want to innovate their offense with hopes of achieving instant success, several outstanding candidates have emerged to become head coaches this offseason.

Here are the eight-best head coach candidates that could be available this offseason.

Riley’s work since taking over at Oklahoma is almost unbelievable. The Sooners are 36-5 since he became the head coach and the offense seems to get better every year. Back-to-back Heisman Trophy winners and No. 1 overall picks the past two seasons were followed by Jalen Hurts finishing second this year for the trophy.

The 36-year-old is probably the most coveted head coach candidate right now by the NFL. If, or when, the Dallas Cowboys fire Jason Garrett, Riley is already drawing their interest. It will take some convincing to get Riley to leave the powerhouse he’s built, but it will be worth it to get his mind and ability to develop quarterbacks into the NFL.

Bieniemy emerged as a candidate last offseason and generated plenty of interest before ultimately staying in Kansas City. Coming off another successful season as the Chiefs’ offensive coordinator, the demand should be even higher for him in 2020.

The 50-year-old’s coaching career began as a running backs coach. He quickly climbed the ranks and made it to the NFL with the Minnesota Vikings from 2006-’10. After a two-year stint calling plays with the Colorado Buffaloes, he joined the Chiefs and coached running backs (2013-’17) then became the offensive coordinator in 2018. He’s more than earned his way as an assistant coach and has all the makings of an excellent head coach.

Just a few years after being fired by the Buffalo Bills, Roman has quickly rebuilt his reputation as one of the best offensive coordinators in football. While teams love to talk about building their offense to fit their quarterback’s skills, few successfully do it as well as Roman.

He helped make Colin Kaepernick into one of the NFL’s most electrifying quarterbacks during their time together in San Francisco. Now, he’s worked closely with Lamar Jackson and helped create an offense that unleashed Jackson to achieve a record-breaking season that will earn him the NFL MVP. He is the ideal head coaching candidate for teams that will have a dual-threat quarterback.

The NFL can be an unforgiving business for players and coaches, especially when new ownership steps in. Rivera learned that lesson with the Panthers, but his fire to stay on the sidelines remains and he should draw interest.

He’s a two-time Coach of the Year and his team largely struggled the past two seasons due to Cam Newton’s injuries. Rivera will need to convince a front office that he’ll hire the right assistants to handle the offense. Still, his reputation, leadership and defensive mind make him a strong hire for an organization that believes in giving him a second chance.

Rhule arrived at Baylor at a time when few coaches wanted to touch the program. He came in and rebuilt a culture that desperately needed fixing and the results thus far have been incredible. After winning one game in 2017, the Bears won seven games the following season and finished 11-2 in 2019.

Rhule’s background is on offense and it helped spark Baylor’s offense to average 35 points per game this past season. He’s also shown the willingness to adapt his offensive philosophy and find the edge that will help his team win. The 44-year-old knows offense, can adapt to any situation and has proven he can win anywhere regardless of circumstances. The New York Jets ruined their shot at Rhule, but another organization won’t make the same mistake this offseason.

Even after what transpired in Denver during his first head coaching stint and then his decision to back out on the Indianapolis Colts, McDaniels is desired across the NFL. He drew interest last offseason and he’s already on Carolina’s radar this coming offseason.

The 43-year-old’s work in New England with Bill Belichick and Tom Brady speaks volumes. He’s a six-time Super Bowl champion and even as Brady declines with age, McDaniels finds ways to make the offense work. An opportunity to work with a reliable quarterback and join a team with more weapons, such as Carolina, could be the perfect situation for McDaniels in 2020.

McCarthy is the most successful coach available this offseason. A year away from the NFL, which he used to prepare like a coach and enhance his abilities, makes him an outstanding candidate this offseason for teams that want to win now.

A Super Bowl champion with a career 125-77 record, McCarthy’s offense went stale in his final seasons in Green Bay. A change was necessary for both sides and McCarthy learned a lot from it. He would already have been pursued given his experience and offensive mind, but now with his complete embrace of analytics, it would be shocking if he isn’t hired this offseason. Keep an eye on Washington for him.

While offensive-minded coaches draw the majority of attention, Saleh’s work with San Francisco’s defense is attracting plenty of attention. Of course, the 40-year-old defensive coordinator comes with a fiery personality.

San Francisco’s defense has allowed the fifth-fewest points (18.4), second-fewest yards per game (269) and has the third-most sacks (47) this season. He’s beloved by the players and his scheme has caused repeated frustrations for the league’s best quarterbacks. It will be crucial for him to hire the right staff to run the offense, but that’s all that stands in the way of Saleh becoming a head coach in 2020.