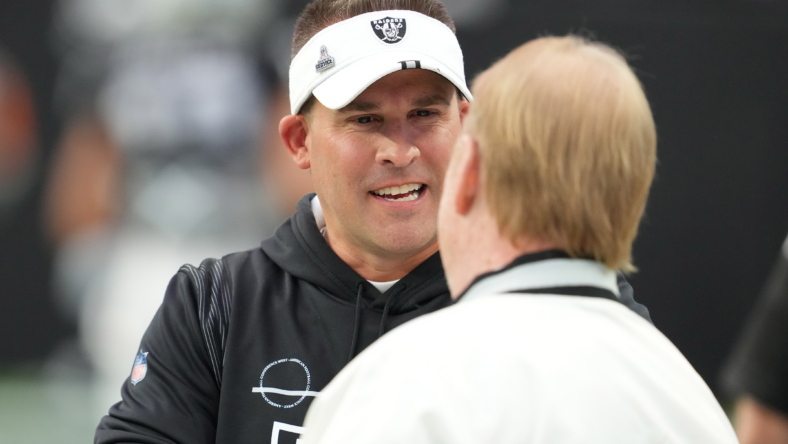 If there’s one coaching seat around the NFL that one would think would be heating up, it’s Josh McDaniels after a 2-7 start to the Las Vegas Raiders season. This effort has the team with the second-worst division in football poised to land the second pick in the 2023 NFL Draft.

Yet, while the outside perception surrounding a team that’s lost three games in a row, four of their last five, and seven of their past nine matchups may be bleak, that’s not how the ownership group perceives the situation.

Instead, as Mark Davis tells it, coach McDaniels is at no risk of losing his job this week, the next, or any time soon. In fact, another report has since emerged suggesting McDaniels has even been given assurances that he will return as the Raiders coach in 2023, no matter the outcome in 2022. Let’s climb down this rabbit hole.

Facing questions following the Raiders’ recent 25-20 loss to Indianapolis, team owner Mark Davis did his best to quiet any rumors that have suggested the team could be close to parting ways with McDaniels, just 10 months after making him the head coach.

In doing so, here’s what Davis had to say:

“As far as Josh goes, I have no issues. When you sign someone to a contract, don’t you expect him to fulfill the contract? I like Josh. I think he’s doing a fantastic job. That’s why I hired him. We did an exhaustive search and found the person we believe is going to bring the Raiders to greatness.”

Davis went on to suggest the Raiders are currently just getting started when it comes to building their team. Yet, this is a group that went 10-7 a year ago and reached the postseason. If not McDaniels, then why have we seen such a big drop-off in the team’s performance?

That’s a question the Raiders will continue trying to address as the season goes on.