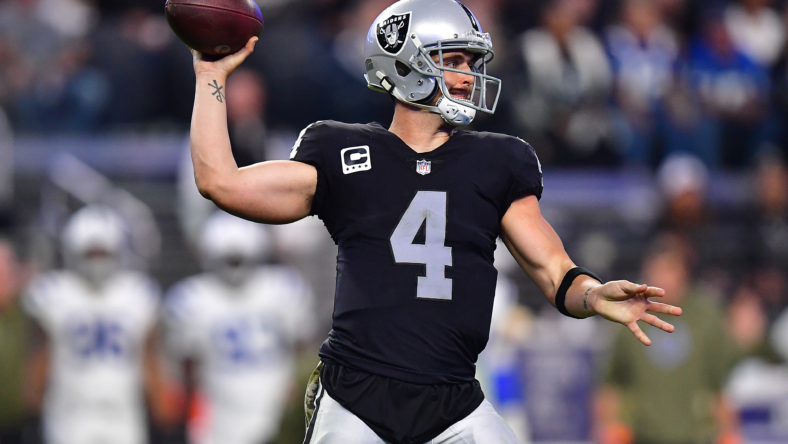 The Las Vegas Raiders gave up another lead and lost by five points to the Indianapolis Colts, who had their interim head coach come in earlier this week.

Las Vegas was leading 20-19 with under six minutes to go in the fourth quarter. The Raiders defense forced a fumble, but despite having the opportunity to pick it up, Indianapolis recovered. On the following play, starting quarterback Matt Ryan, who did not practice with the first-team this week, threw a 35-yard pass to wide receiver Parris Campbell.

The Raiders had one last chance to put the ball in the endzone on their final drive, getting inside the Colts’ 20-yard line, but could not score.

“It kind of sounds like a broken record. We’re going to have to learn how to take some of these close losses and make some of the plays that need to make, throughout the course of the game. It is not only on the last drive.”

The Silver and Black have now lost three consecutive games to NFL squads with records under .500, as well as four of the last five.

Here are five takeaways from Sunday’s game inside Allegiant Stadium.

One-score games have not gone the Las Vegas Raiders’ way

Last season, the Raiders excelled in games decided by seven points or less and was a big reason why they made the playoffs.

After going 7-2 in one-possession games, the team is 0-6 in one-score games, and at the midway point of the season, the Raiders have not yet found the recipe to win a close ball game.

McDaniels said he has not quite found what it takes to hold late leads with his coaching staff.

“We’re going to have to figure out something different to do to try to get free from some of these close games or close scores, and or make enough plays to win,” McDaniels said. “It always starts with us. It starts with me.”

All six of these losses are not the result of the team trailing by multiple touchdowns and fighting its way back to come up short. This team has had leads and can not find ways to get a victory, like Sunday.

Quarterback Derek Carr, who completed 24-of-38 passes for 248 yards and two touchdowns, said losing these types of games is the difference in the team’s energy both inside Allegiant Stadium, in the locker room, and on the practice field.

“The NFL is one-score games all the time. So, this team has to learn how to finish those. There’s been so many of those. You flip all of those and everyone’s feeling good, and I feel great about everything. And that isn’t the case. But it’s on all of us.”

Raiders were hurt and challenged by harmful penalties

Las Vegas made costly mistakes that led to flags being thrown, especially early.

The Raiders had three, three-and-outs, and a turnover on downs before going a 12-play, 79-yard drive ending in tight end Foster Moreau’s 4-yard touchdown catch on the team’s fifth and final drive of the first half.

On the team’s second drive, the Raiders were penalized for holding on the first play, ineligible man downfield on the second, and was sacked on the next play leading to a 2nd-and-34.

“We committed some penalties offensively that obviously create a bunch of scenarios where there not good scenarios,” McDaniels said. “Anytime you do that offensively, it’s going to look poor. I thought we didn’t do a good job of playing penalty-free, certainly not in the first half.

Having long down and distances challenge Carr and the offense even more to be in a good position and for McDaniels to use the entire playbook. Penalties ultimately hurt, as Las Vegas was even called for too many men on the field in this game.

On the Raiders’ first two touchdown drives, they had to overcome holding and tripping penalties as the former came on third down but marked ahead of the line of scrimmage.

In total, the Raiders were penalized 10 times for 74 yards.

The two No. 1 ball carriers from both sidelines represented well, but one did better.

Taylor, who made his return after being sidelined the past couple weeks due to an ankle injury, was able to beat the Raiders, including scoring a 66-yard rushing touchdown in the third quarter.

On the other hand, Jacobs was going up a defense that only allowed 3.8 yards per carry to opposing running backs. On Sunday, Jacobs, who scored his touchdown also in the third quarter, was able to extend drives as he had seven rushing first downs to maintain his NFL lead in that category.

This was a key matchup to watch as both players rank inside the top 15 in rushing yards among NFL running backs.

If there is one positive takeaway defensively, it was the spirit of defensive end Maxx Crosby, who led the team with 10 tackles and also recorded the team’s lone sack.

Every play, from the first snap to the final horn, Crosby gave it all that he can. Ultimately that is what you want your captain on the defense to do.

That sack was important at the time because not only did the Raiders get a stop to open the second half, but the Colts missed a 48-yard field goal on the next play.

Despite the results of the game, the 2021 Pro Bowl Defensive MVP has continued to play with a high-energy mentality by fighting through blocks to get to whoever has the ball.

Carr has been through a lot in his nine years in the organization, and Sunday marked another chapter to the story as the team is now 2-7.

Both Carr and wide receiver Davante Adams, who had nine receptions for 126 yards and a touchdown, expressed their frustration after the game.

As the team’s longest-tenured player, Carr said he takes this loss in from McDaniels’ coaching points on Monday and will be ready to prepare for two road matchups against Denver and Seattle.

“The emotion of nine years of stuff hit me today for how much I really love this place,” Carr said after the game. “It’s not going to change anything. I’m going to come here and fight, compete next week and that’s what I am going to do.”

Adams said that the team is not quite on the same page and the mentality of gameday is not quite where it should be.

“Got to have everyone on the same wavelength. Everybody’s got to go out there and put everything into it throughout the week and Sunday is supposed to be fun. And that’s the least fun day of the week right now. So, that’s a problem. We have to fix that.”