This offseason, Las Vegas Raiders general manager Dave Ziegler has a lot of work to do. He must find a suitable trade partner for Derek Carr, revamp the offensive line and overhaul a defensive unit that ranked 26th in scoring and gave up the fifth-most yards for the 2022 season.

Based on that assessment, the Raiders have a grocery list of roster needs to address in the coming months. Where should they start? What are the team’s biggest priorities?

We’ll explore all the holes on the roster and the spots in need of an upgrade because of possible departures in free agency and/or underwhelming performances this past term.

In the list below, you won’t see quarterback listed because that’s always the most-important position of need when a team doesn’t know who’s going to start under center for the upcoming campaign. And as we know, Carr is likely on the way out of Vegas.

These rankings are based on how much help the team needs at each spot and the quality of talent under contract beyond the 2022 season. For example, a position without a clear-cut starter will rank higher than a role with a surefire lead playmaker who has time left on his deal.

Related: Projecting the cost for the Las Vegas Raiders to re-sign Josh Jacobs

In November, the Las Vegas Raiders claimed Jerry Tillery off waivers after the Los Angeles Chargers released him. His presence helped unlock edge-rusher Chandler Jones, who started to make a larger impact in the pass rush around Thanksgiving through Week 16 before he suffered a season-ending elbow injury.

Unfortunately, many of us remember Tillery for his boneheaded unsportsmanlike conduct penalty as Vegas blew its fourth double-digit second-half lead against the Los Angeles Rams in December. Still, his contributions illustrated why the Raiders need a defensive tackle who can penetrate and generate some pressure up front. 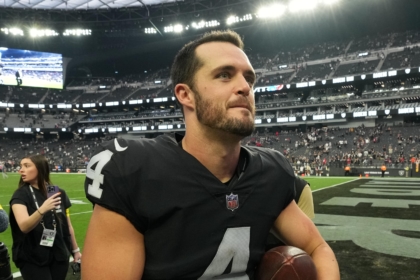 Also Read:
Derek Carr laments end of Raiders tenure in farewell to fans: ‘I never envisioned it ending this way’

The Raiders need an upgrade at defensive tackle because rookies Neil Farrell Jr. and Matthew Butler didn’t show much in 2022. Perhaps. one or both of them make strides in the 2023 campaign or Bilal Nichols plays up to his two-year, $11 million contract. Vegas has talent at this position, but a few guys must do more to make their presence felt in the middle.

For the Raiders, defensive tackle is a need. But they can develop some young guys at the position, too.

The Raiders have a mixed bag at cornerback. Nate Hobbs transitioned from the slot to a primary outside cover man and struggled in some games. He allowed five touchdowns and a 120.2 passer rating (out of a possible 158.3) in coverage, which is significantly worse than giving up one touchdown and allowing a 92.1 passer rating in 2021.

Yes, Hobbs broke bones in his hand, but he did go through rough patches right before the injury and late in the season. Perhaps, defensive coordinator Patrick Graham should feature Hobbs in the slot more than out wide.

Despite Hobbs’ struggles throughout the 2022 season, he’s projected to start next year.

“Outside of Pro Bowl defensive end Maxx Crosby, high-priced pass rusher Chandler Jones — who did come on over the second half of the season — and defensive back Nate Hobbs, no one is assured of a starting spot next season,” The Athletic’s Vic Tafur wrote.

Cornerback Amik Robertson may be the only player who made notable improvements under Graham’s tutelage. He registered two interceptions and led the Raiders in pass breakups (nine) this past season while allowing a 60.9 percent completion rate and a 96.2 passer rating in coverage.

Vegas may re-sign Rock Ya-Sin, who played well before he suffered a knee injury that sidelined him for the last five games of the season. He allowed a 60.9 percent completion rate with a 82.6 passer rating in coverage.

Even if the Raiders re-sign Ya-Sin with the hope that he can stay healthy, they should keep their eyes on Cam Smith (South Carolina) and Clark Phillips III (Utah) in the 2023 NFL Draft. Both flashed with ball production in their collegiate careers. The former had six interceptions and the latter registered nine. Vegas needs a ball hawk in the secondary with a defense that tied the New York Giants for the fewest interceptions (six) in 2022.

Cornerback is a premium position, so it should be higher than defensive tackle on the Raiders’ priority list. Vegas needs a lead boundary cover man to join Hobbs and Robertson.

Remember Tafur’s roster nugget above—Crosby, Jones and Hobbs are the only starting holdovers on defense going into the offseason. He didn’t mention Trevon Moehrig who regressed from his promising rookie campaign. He allowed a 137.5 passer rating in coverage, significantly worse than his 92.5 rating in 2021.

On top of that, Duron Harmon, who played well as a battle-tested veteran leader in the secondary, will become a free agent in March.

The Raiders don’t have a sure-fire starter at safety because of a big question mark around Moehrig’s status under Graham. You must consider the fact that the team selected him in the second round for former defensive coordinator Gus Bradley’s scheme. Graham may want to find a player who’s a better fit for his system via free agency or the draft.

Vegas may have a competition at both safety spots next summer, which is why this position ranks fourth on the priority list over cornerback where Hobbs is penciled into a starting role and Robertson showed improvement.

Right tackle Jermaine Eluemunor will become a free agent, which opens up a spot on the offensive line. Among the players within the position group, he committed the most penalties (10), per Pro Football Focus. Eluemunor has some versatility, but he’s a backup on most teams.

Early in the 2022 season, Eluemunor alternated drives with rookie seventh-rounder Thayer Munford Jr. According to Vincent Bonsignore of the Las Vegas Review-Journal, back in the summer after the Raiders waived Alex Leatherwood, the team thought Munford could become a starter:

We have no idea what the Raiders think of Munford after a took 369 snaps at right tackle and inline tight end, but don’t count him out of the mix. That being said, the front office should invest heavily in this position.

In today’s NFL, teams need two quality tackles to counter edge-rushers who can play on either side of the line. The Raiders shouldn’t put all their hopes into Munford with his limited experience.

Tackle ranks higher than safety because of the importance of the position. Secondly, you’re more likely to find a high-end safety than a top tackle on the free-agent market. Case in point, safety Jessie Bates III will be a free agent while injury-prone Isaiah Wynn, Kelvin Beachum and George Fant may be the best right tackle options available on the open market.

The Raiders may not have a starting guard on the current roster, which pushes this position to the No. 2 spot in roster needs.

According to Tafur, the coaching staff might move Dylan Parham from guard to center. In the preseason, the rookie third-rounder played most of his snaps at the pivot.

If Tafur is correct, the front office may cut center Andre James and save $3.6 million unless the coaching staff plans to use him in a backup utility role as a fill-in at multiple positions.

Regardless, the Raiders need a lot of help on the interior of their offensive line. Opposing defenders generated a lot pressure in the B-gaps. Parham and Alex Bars made most of the starts at guard and allowed 93 total pressures, per PFF. The former led the offensive line in pressures allowed with 55.

Head coach Josh McDaniels should add two guards to his offseason wish list whether Parham transitions to center or not.

Above all, the Raiders need a complete overhaul at linebacker.

At the position, Divine Deablo, undrafted rookies Luke Masterson and Darien Butler and Kana’i’ Mauga (zero career snaps) are the only linebackers on the books beyond the 2022 campaign. Vegas could re-sign 30-year-old Denzel Perryman, but he battled injuries this season (missed five games) as he has early in his career.

The Raiders need more youth and versatility in the middle of their defense. They must do a better job tracking down pass-catching running backs. Graham’s unit allowed the second-most receiving yards per game (47.7) to running backs this past season, per Football Outsiders.

Right now, Deablo is the Raiders’ best linebacker under contract, and he allowed three touchdowns and a 123.6 passer rating in coverage while on the field for eight games (464 defensive snaps).

How long has it been since the Silver and Black had consistency at linebacker? Well, 40-year-old Kirk Morrison isn’t walking through the door. Instead of putting a Band-Aid on the linebacker position, Ziegler and Co. should find someone who can become a mainstay for more than two years at the heart of the defense.

Don’t underestimate the importance of a quality linebacker who’s often described as the “quarterback” of the defense.