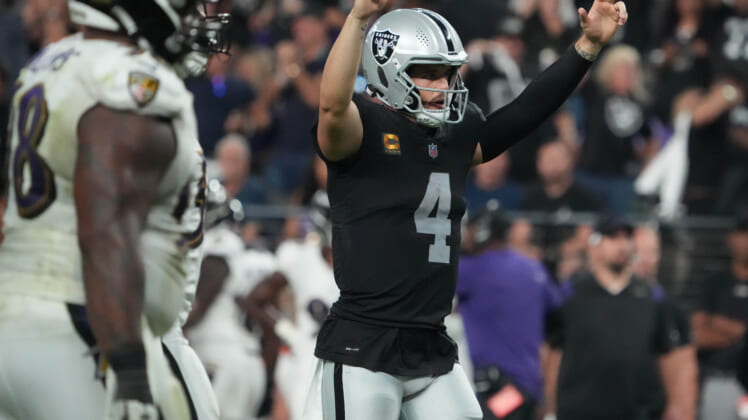 The Las Vegas Raiders played in front of an electric atmosphere at home Monday night against the Baltimore Ravens.

It was Las Vegas’ first home game in Sin City with fans in attendance after having to play in an empty Allegiant Stadium last season due to the COVID-19 pandemic.

Initially, it did not look like The Las Vegas Raiders stood much of a chance against Baltimore. With Derek Carr struggling early on, Baltimore opened up a 14-0 lead midway through the second quarter.

That’s when the Raiders decided a comeback was going to be in the cards. With Baltimore up 27-24 in the final seconds of regulation, Daniel Carlson nailed a 55-yard field goal to force overtime.

On their very first possession of overtime, Carr hit second-year wide receiver Bryan Edwards on a 33-yard strike on third and short. Officials initially called it a touchdown before the review showed that Edwards’ knee was down short of the goal line.

After a false start on second down, Carr threw an incomplete pass to bring up third down. That’s when the craziest of the crazy happened. Carr’s next attempt was batted in the air in the end zone, only to be picked off by Ravens cornerback Anthony Averett.

From six points and the walk-off win to scoring zero points and giving Baltimore a chance to win the game. It did not happen. Former NFL MVP Lamar Jackson lost a fumble on the Ravens’ first possession of overtime, which was forced by veteran defensive end Carl Nassib.

Within minutes, Carr returned to the field and hit wide receiver Zay Jones on a 31-yard touchdown for the walk-off win.

That’s just absolutely bonkers. It is one of the craziest “Monday Night Football” games we’ve seen in some time.

And Las Vegas is about to be absolutely lit Monday evening. Just crazy stuff.