Frank Vogel’s Los Angeles Lakers lost to the Indiana Pacers, who are 16-29, on Wednesday night. Curiously, coach Vogel decided to bench one of their star players, Russell Westbrook, for the final three minutes and 52 seconds of the game.

The Lakers were down 101-94 at the time of his benching and Westbrook committed his fourth foul of the game a minute prior. It added to his mistakes from just a few minutes earlier, when Westbrook allowed Pacers guard Caris LeVert to drive to his right for an easy bucket. This defensive lapse may have been the final straw as coaches reportedly stressed the importance of redirecting LeVert, forcing him to use his left hand, instead of allowing him to get in his comfort zone going to his right.

When asked after the game why he benched one of his stars in a close game, Vogel replied “Playing the guys that I thought were going to win the game”.

The Lakers would eventually lose 111-104. But naturally, it led to some wondering what the benching meant for the relationship between Vogel and Westbrook, with both of their futures being shrouded in uncertainty as of late. Russ has been loosely linked in trade rumors and Vogel’s job security has been in question.

ESPN’s Dave McMenamin reports Vogel was recently given permission to bench Westbrook, basically giving the coach the leeway to do his job with the message expressed as “you got to do what you got to do” as a coach.

The report goes on to mention the staff had been considering keeping Westbrook off the floor in clutch situations late in the game, but were hesitant to do anything that could further impact his on-court confidence.

They even asked LeBron James about his opinion on the matter, and strongly hinted that Russ himself likely wouldn’t react positively to a reduced role when the team needs him most.

“Would you think that would bother Russ not being in a late game?” he said, answering a reporter’s question with a question, rather than giving a straight answer.

The Lakers are now 22-23, in eighth place in the Western Conference. The NBA Trade Deadline is Feb. 10 and several have wondered if the Lakers are angling to make a move, sooner than later. Whether anyone is willing to take on Westbrook’s $44 million salary owed to him this season remains to be seen. The Lakers may be stuck with trading some of their smaller pieces instead. 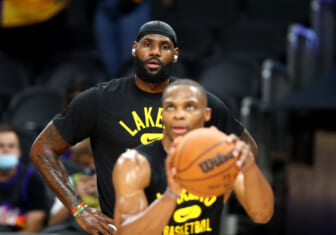