When it comes to the top two pound-for-pound talents in the UFC, Khamzat Chimaev believes beating Israel Adesanya would be a far easier task than Kamaru Usman.

Chimaev (10-0) has taken the UFC and its fanbase by storm over the last two years. In just four fights inside the fabled Octagon, he has gone from being a high-level Eastern European prospect to the fastest rising star in the world’s biggest MMA promotion. He is unbeaten in the UFC, scored finishes in all of his fights, and only one has reached the second round. Not to mention, he has two victories apiece in the middleweight and welterweight divisions.

Observers of the sport believe he has the talent and dominant wrestling to be a UFC champion in the near future. If he were to beat second-ranked 170-pounder Gilbert Burns in a few weeks at UFC 273, the Chechen could find himself in a title fight with division king Usman (20-1) later in the year. It would be a startling place to find himself after just 11 professional fights.

Khamzat Chimaev explains why Israel Adesanya would be easy work

The hype around the 27-year-old is so momentous that there are observers of the sport who feel he not only has what it takes to beat Usman, the No. 1 ranked pound-for-pound fighter in the UFC, but also the man behind him in the rankings, middleweight champion Adesanya (21-1).

Related: Khamzat Chimaev next fight – Get the latest on the Chechen’s clash with Gilbert Burns

Chimaev was asked about both dream fights in a shared interview with training partner Darren Till on a Wednesday edition of The MMA Hour, and it seems he sees “The Last Stylebender” and his wrestling deficiencies as easy prey in a possible matchup.

“Izzy, I think it will be more easy for me to smash that guy [than Kamaru Usman],” Chimaev said. “He has zero wrestling. The guy he fought last time, he’s not a wrestler — he took his back. If I take his back, brother, I’ll squeeze his head off. I’ll take his head off. Easy money for me.”

The “guy” in question was Robert Whittaker in his February rematch loss to Adesanya at UFC 271. In the pair’s highly competitive scrap, the gifted striker was able to score four takedowns on the reigning champion despite not having a distinguished history as a grappler. 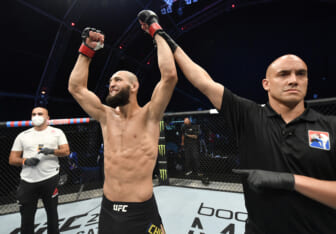 Chimaev’s absurd confidence that he can beat Adesanya isn’t just purely based on the stylistic advantages he believes he would have because of his amazing wrestling, but also on the simple fact he believes he is the greatest cage fighter alive, and he would “kill everybody” in a fight.

“I feel [like] I could kill everybody, brother,” said Chimaev. “I am the greatest of all time, brother. I am the best.”

UFC 273 takes place on April 9 from inside the Vystar Veterans Memorial Arena in Jacksonville, Florida.