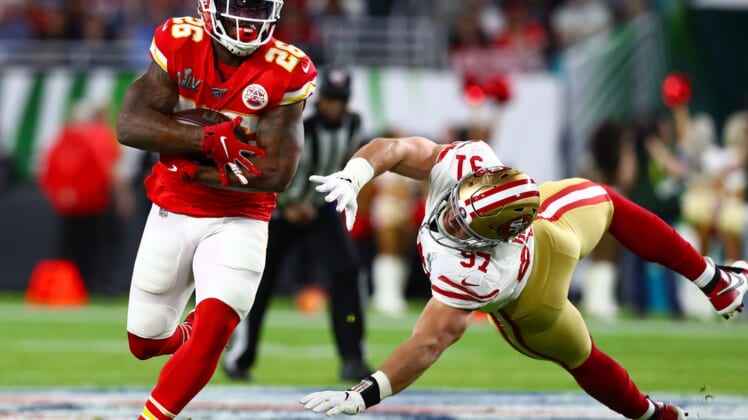 The Kansas City Chiefs released running back Damien Williams, who played a key role in their Super Bowl LIV title before opting out last season due to COVID-19 concerns, on Tuesday, according to numerous reports.

The Chiefs save $2.2 million against the salary cap by cutting Williams, who rushed for 104 yards and scored two fourth-quarter touchdowns in Super Bowl LIV, according to reports.

Williams became expendable with the emergence of rookie Clyde Edwards-Helaire, who led the team in rushing with 803 yards and four touchdowns on 181 carries after the Chiefs took him in the first round of last year’s draft. Edwards-Helaire also played in just 13 regular-season games due to injury.

The Chiefs also signed second-string running back Darrel Williams to a one-year contract worth up to $2.13 million with $930,000 guaranteed on Tuesday, according to The Kansas City Star.

Darrel Williams, who signed with the Chiefs as an undrafted free agent out of LSU in 2018, rushed for 169 yards and a touchdown on 39 carries last year. He also had 18 receptions for 116 yards.

Damien Williams, who turns 29 on April 3, led Kansas City in rushing in 2019, when he ran for 498 yards and five touchdowns on 111 carries, in addition to making 30 catches for 213 and two touchdowns.

Damien Williams wants to play in 2021, per his agent. He came into the NFL as an undrafted free agent out of Oklahoma in 2014 and spent his first four seasons with the Miami Dolphins before signing with the Chiefs in 2018. He has rushed for 754 yards and nine touchdowns, in addition to posting 53 catches for 373 receiving yards and four scores, in Kansas City.