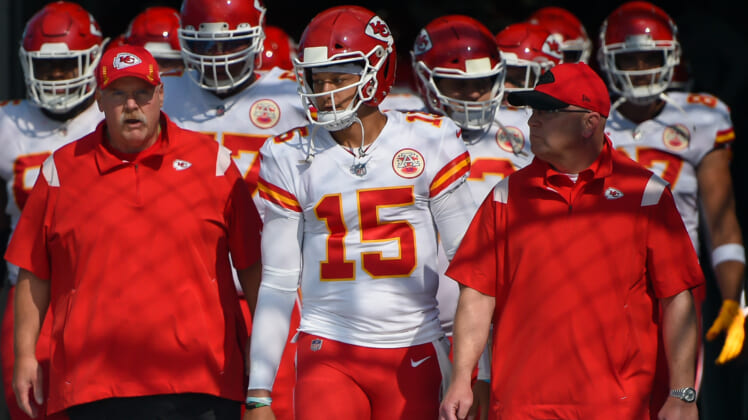 The 2022 Kansas City Chiefs are set to have one of the toughest starts to a season in NFL history.

On Thursday, the NFL unveiled the complete schedule for their 2022 season. Along with the news of which teams will play on Sunday and Monday nights, and international matchups, a major focus of the evening was on the schedules for the top teams in the league. One of those organizations that received a lot of attention was the Kansas City Chiefs.

The 2021 AFC Conference Championship participants were expected to have a difficult slate of games in the upcoming season. A fact that is not unusual and par for the course for all of the elite NFL teams each year. However, it seems that Patrick Mahomes and the gang ended up with the shortest end of the stick when it comes to schedule difficulty in 2022.

Following the reveal of the new schedules, Elias Sports Bureau reported that the Chiefs will actually make NFL history by being the first franchise ever to play teams with winning records the prior season over their first eight games. Below you can find those games and the opponent’s records in 2022.

What makes that first set of eight games impressive is that only two of those matchups come against division rivals like the Los Angeles Chargers and Las Vegas Raiders. The AFC West is likely to be one of the toughest divisions in the league this year with the addition of Russell Wilson to the Denver Broncos.

Related: NFL games today – Get the full slate of holiday and international games in 2022

Furthermore, with some offseason moves and tweaks — Matt Ryan to Indianapolis and Davante Adams to Las Vegas –several of those squads might actually be much improved this season compared to 2021. The only organizations that may see a decline are the Titans and 49ers, but both should still be good enough to remain an over .500 team next season.

In 2022, the Chiefs will have a long and hard road back to the playoffs.