Patriots offensive coordinator Josh McDaniels is reportedly rounding up allies in advance of his interview for the Philadelphia Eagles' head coaching vacancy. 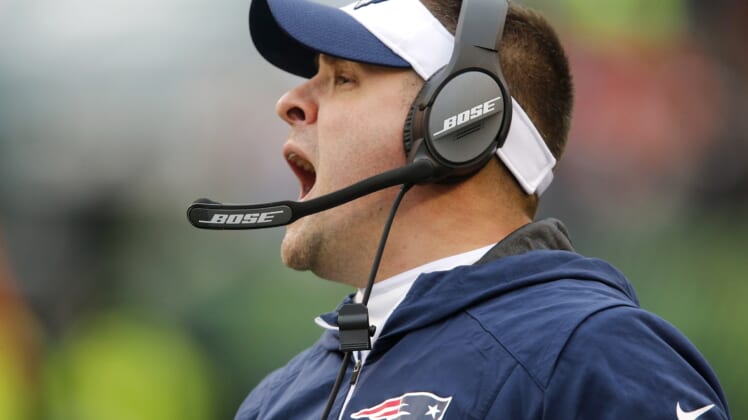 The Philadelphia Eagles are in the midst of an extensive head coaching search, and it sounds as though New England Patriots offensive coordinator Josh McDaniels is emerging as a leading candidate for the job.

According to the latest NFL rumors, McDaniels is slated to have an interview soon with the Eagles soon, and is already searching for assistants to bring with him to Philly.

Report: Josh McDaniels to interview with Philadelphia Eagles in Florida

Bo Wulf and Zac Jackson of The Athletic reported on McDaniels’ imminent Sunday meeting with Philadelphia’s powers that be, as the team seeks a successor to fired, Super Bowl-winning coach Doug Pederson.

It’s really a strange fit on paper in so many ways. McDaniels has essentially been second in command to Patriots legend Bill Belichick, who’s had final say over personnel and has guided New England to six championships that way. It’s believed McDaniels is in line to succeed Belichick whenever the latter retires.

After a failed stint as Denver Broncos head coach that lasted less than two seasons, McDaniels ultimately rebuilt his reputation in Foxborough. Then, after he was announced as the Indianapolis Colts’ new head coach in February 2018, he backed out and returned to the Pats.

McDaniels has taken head coach interviews since then, yet nothing has panned out. Is Philadelphia just trying to pick his brain and see what makes New England so great? Well, if McDaniels is already inquiring about assistants to hire, at least he thinks he’s one of the front-runners for the gig.

Is Josh McDaniels a serious contender for Eagles HC?

Seems like it. More than perhaps any other team, though, the Eagles are casting a seriously wide net in their coaching search, even going so far as to request an interview with rival Dallas Cowboys offensive play-caller Kellen Moore, who’s not really on the radar for any other vacancies. Philly also interviewed Patriots inside linebackers coach Jerod Mayo.

McDaniels wasn’t ready in Denver, balked at Indianapolis a few years ago, and is coming off a 2020 season in which he failed to adjust on the fly with a new quarterback in Cam Newton. It might be wiser for him to either ride out his tenure in New England as long as it will go, or develop a new, young quarterback before taking his talents to another franchise.

The Eagles aren’t exactly the most attractive opening. They have a messy quarterback situation, as franchise player Carson Wentz regressed drastically in 2020 and Jalen Hurts is mostly unproven entering his sophomore NFL season.

Between that controversy at the sport’s most vital position and a payroll that’s projected to put Philadelphia more than $51.6 million in salary cap debt for 2021, McDaniels really needs to have a plan in place to make the leap to head coach.

It almost feels like yesterday that Pederson and the Eagles outgunned McDaniels and the Patriots in Super Bowl LII by a score of 41-33. How quickly things seem to change in the NFL.