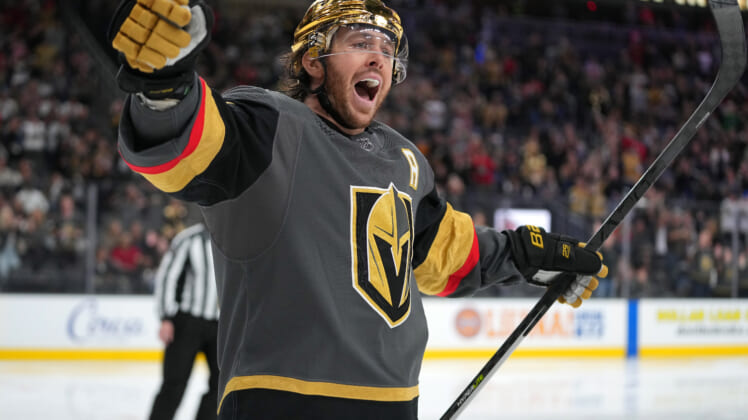 When the Vegas Golden Knights were picking players for their original roster in the expansion draft, they couldn’t believe that Jonathan Marchessault was left unprotected. Marchessault was a member of the Florida Panthers organization at the time and was coming off a 30 goal season. Despite his offensive prowess, the Panthers let him walk for nothing and the Golden Knights gladly welcomed him to the desert.

Now a half-decade later, Marchessault has evolved into one of the most crucial players for the Golden Knights. Not only is he an impact player on the ice but he also is a key personality off of it. He’s forever entrenched himself as one of the most important “Misfits”, the name given to the players that made up the original Golden Knights roster.

During his first few years with the Golden Knights, Marchessault was a high-energy player that could chip in offensively. His line with William Karlsson and Reilly Smith has been a staple for the Golden Knights since their inaugural season. They’ve always helped provide secondary scoring and energy but have never been relied upon as the top line.

This season, the Golden Knights have struggled with lots of their big names going down with injuries. Marchessault has stepped up in their absence and taken his game to another level, even with a rotating cast of linemates.

It’s not often that NHL players have their most productive season at age 31 yet that’s exactly what Marchessault is on pace to do. He’s two goals off his career-high of 30, a number he should easily surpass, and will likely come very close to matching his career-best 75 points as well.

With Mark Stone, Jack Eichel, and other important offensive players spending significant time sidelined with injuries, the Golden Knights have looked to other places on their roster for scoring. Marchessault is one of the only players on the roster that has taken advantage of the opportunity and stepped up in a major way.

The unexpected goal-scoring outburst from Marchessault has been welcomed by the Golden Knights. At an age where most players start their decline, he has taken another step. He has the most goals and primary assists at 5-on-5 for the Golden Knights, displaying his ability to be an offensive play driver.

Marchessault: The perfect embodiment of a Golden Knight

Not much has come easy to Marchessault during his hockey career. He was never drafted but instead signed as a free agent with the New York Rangers organization. He worked his way up through the system, bouncing between different leagues and teams.

“I’ve got a lot of time for a guy who’s taken that type of path. Nothing’s been handed to him and that’s the way he plays,” commented head coach Peter DeBoer closer to the start of the season. “He plays with a chip on his shoulder like he’s out to prove the people who told him he couldn’t do it wrong.”

While the Golden Knights may not be perennial Stanley Cup contenders and one of the model franchises around the league, they still cling on to some of their original identity. The first Golden Knights team was a ragtag group of unwanted players that, when placed together, were greater than the sum of their parts. Marchessault continues to represent that underdog mentality for the team.

This season, the Golden Knights have found themselves in an unfamiliar position. They’re stuck in a closely contested playoff battle and things haven’t been looking good as a rough 2022 has sent them sliding down the standings.

This has forced them into a couple of must-win games and it’s been Marchessault that has come through when needed most. Since March 1st, Marchessault is tied for second on the team in goals with seven, just two behind superstar Jack Eichel.

The team is going to need more big performances from Marchessault if they want to make the playoffs. Looking at the bigger picture, the Golden Knights are facing a big cap crunch and decisions are going to have to be made. They’d be fools to let Marchessault leave the organization after everything he’s given.