Damning new allegations against Jon Gruden of homophobia and misogyny 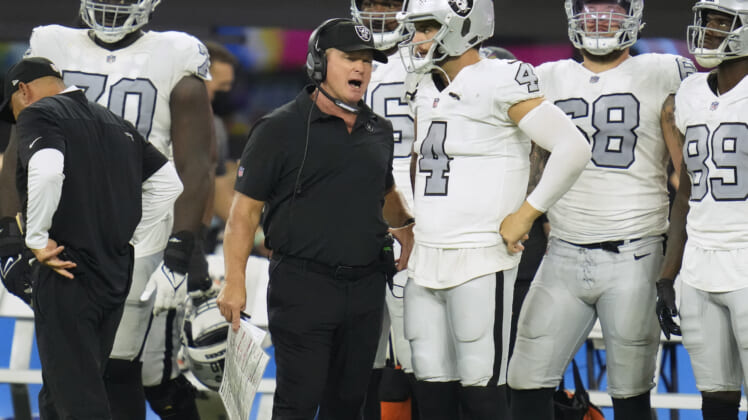 The entire Jon Gruden drama is not going away any time soon. Days after it was reported that the Las Vegas Raiders head coach had directed racial slurs in the direction of NFLPA Executive Director DeMaurice Smith comes some more damning information relating to the Super Bowl winner.

The NY Times uncovered what it calls a “trove” of emails sent from Gruden displaying both homophobia and misogyny.

“Gruden’s messages were sent to Bruce Allen, the former president of the Washington Football Team, and others, while he was working for ESPN as a color analyst during ‘Monday Night Football,’ the sports network’s weekly prime-time telecast of N.F.L. games,” the scathing report read. “In the emails, Gruden called the league’s commissioner, Roger Goodell, a ‘faggot’ and a ‘clueless anti football pussy’ and said that Goodell should not have pressured Jeff Fisher, then the coach of the Rams, to draft ‘queers,’ a reference to Michael Sam, a gay player chosen by the team in 2014.”

According to The Times, the emails were sent during a seven-year period ending in early 2018 — immediately ahead of Jon Gruden being re-hired as the Raiders’ head coach. This comes mere months after Raiders defensive end Carl Nassib became the first openly gay player in NFL history, which is an obvious backstory to it all.

It must also be noted that the emails are not limited to 2011.

“In numerous emails during a seven-year period ending in early 2018, Gruden criticized Goodell and the league for trying to reduce concussions and said that Eric Reid, a player who had demonstrated during the playing of the national anthem, should be fired. In several instances, Gruden used a homophobic slur to refer to Goodell and offensive language to describe some N.F.L. owners, coaches and journalists who cover the league,” the report read.

This comes on the heels of an email from 2011 becoming public record in which Gruden referred to the aforementioned DeMaurice Smith as having “lips the size of Michellin tires.”

These are the emails that were referenced in an earlier report on Monday that indicated the NFL had sent to the Raiders for further review. As for the Raiders, owner Mark Davis publicly decried Gruden’s previous bigoted language.

This is a developing story. As such, we’ll have updates when they become available. We can expect more comments from the Raiders’ organization and the NFL moving forward.

Gruden, 58, is in the fourth season back with the Raiders after signing a 10-year contract to return to the organization. He previously served as their head coach from 1998-2001 before being traded to the Tampa Bay Buccaneers, where he won a Super Bowl.