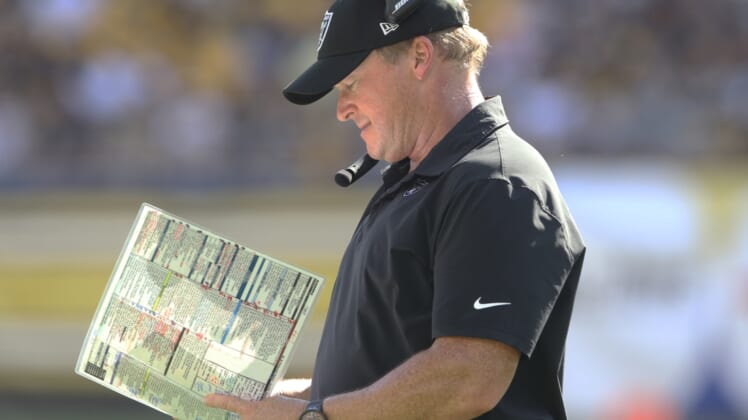 “Dumboriss Smith has lips the size of michellin (sic) tires,” Gruden wrote in an email to then-Washington Football Team president Bruce Allen amid an NFL lockout.

Gruden was not coaching at the time, but rather working as ESPN’s color commentator for “Monday Night Football.”

The newspaper reached Gruden for comment, and he apologized while saying he did not recall writing the email in question. “I’m really sorry,” he said.

Gruden added in comments to ESPN that he felt “ashamed” and had given his players forewarning Friday that the report was coming out.

“I’m ashamed I insulted D. Smith,” Gruden told ESPN. “I never had a racial thought when I used it. … I’m embarrassed by what’s out there. I certainly never meant for it to sound that bad.”

According to the Journal, the league uncovered the email while reviewing 650,000 emails during its investigation into the Washington Football Team’s workplace culture.

It is unclear whether Gruden will face punishment from the league or the Raiders.

“The email from Jon Gruden denigrating DeMaurice Smith is appalling, abhorrent and wholly contrary to the NFL’s values,” the league said in a statement. “We condemn the statement and regret any harm that its publication may inflict on Mr. Smith or anyone else.”

Smith, who has served as the players association’s executive director since 2009, told the Wall Street Journal that it was “not the first racist comment that I’ve heard and it probably will not be the last.”

“This is a thick-skin job for someone with dark skin, just like it always has been for many people who look like me and work in corporate America,” he said. “You know people are sometimes saying things behind your back that are racist just like you see people talk and write about you using thinly coded and racist language.”