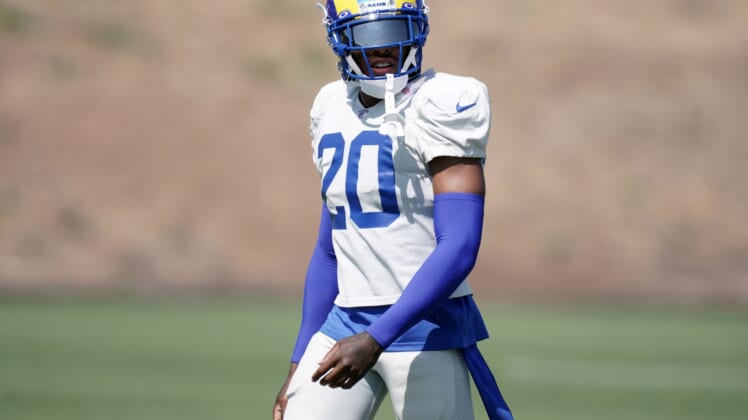 The Los Angeles Rams were barely able to sneak out with a win against the winless New York Giants in Southern California Sunday afternoon. Los Angeles was up 17-9 late in the game when Darious Williams intercepted Daniel Jones to end it.

However, it’s what we saw after the game that has people buzzing. Giants wide receiver Golden Tate got into it with Rams Pro Bowl cornerback Jalen Ramsey at mid field right after the game ended.

According to various reports from the scene at SoFi Stadium, each one landed a punch.

It’s not 100% known what led to the two coming to blows. What we do know is that Ramsey put up a clean, hard tackle on Tate earlier in the game.

There’s also apparently an ongoing off-field rift between the two.

According to Ryan Dunleavy of the NY Post, Ramsey is the father of two of Tate’s young nieces. He reportedly ended a long-term relationship with Tate’s sister during her pregnancy last summer to date a Las Vegas-based dancer. That could help explain the two getting into it after Sunday’s game.

Both Tate and Ramsey are likely to hear from the NFL after this. After all, unnecessary physical contact in the age of COVID-19 is frowned upon by the league. That’s especially true after multiple games were postponed this week due to an outbreak of the virus.