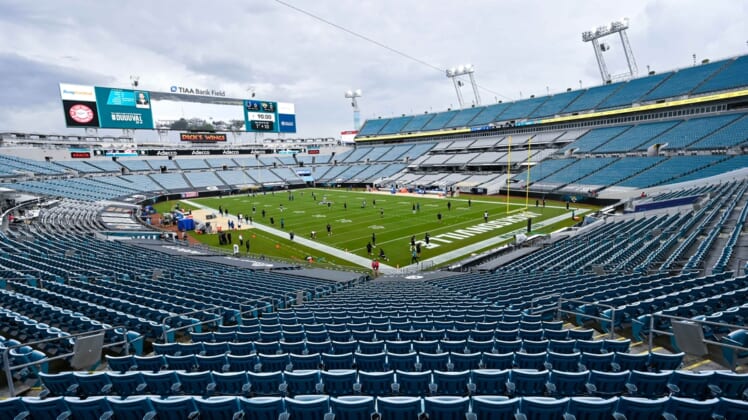 Sep 13, 2020; Jacksonville, Florida, USA; General view of the stadium prior to the game between the Jacksonville Jaguars and the Indianapolis Colts at TIAA Bank Field. Mandatory Credit: Douglas DeFelice-USA TODAY Sports

A plan to transform downtown Jacksonville, which would include the “Stadium of the Future,” was unveiled Thursday by the Jacksonville Jaguars.

Called 1st DownTown Jacksonville, the plan reimagines the area around TIAA Bank Field as a hub for jobs and tourism that will “solidify Jacksonville as the Hometown of the Jaguars and the future site of a Super Bowl Parade,” the proposal said.

While the plan includes adding a luxury hotel, enhancing parks and making the area a “world-class riverfront destination,” the focus Thursday was on enhancements for the Jaguars — improvements new head coach Urban Meyer have said are necessary to attract free agents and field a first-class team.

Those improvements include a $120 million football performance center, which the city and team would split 50-50 under Jaguars owner Shad Khan’s proposal. The 125,000-square-foot facility would include locker rooms, team and positional meeting rooms, training and recovery areas, medical support facilities, weight room, dining facilities, office space and a draft room.

All football-related activities currently are confined to the stadium.

It’s all part of a long-range plan that eventually would include improvements to TIAA Bank Field that could be a negotiating point as the city and Jaguars talk about extending a lease at the city-owned stadium that expires in 2030.

“My goal is for downtown Jacksonville to be the envy of cities here in the U.S. and elsewhere, and I see no reason why we can’t achieve that goal,” Khan said. “I am confident we have the local leadership, spirit and commitment to revitalize downtown Jacksonville in a manner that will make the world take notice while also serving the needs of the community and the people who make Jacksonville their home.”

While the Jaguars hope the facilities could be in place in 2023, the proposal — and funding — requires the approval of the City Council. A previous $450 million improvement project pitched by the Jaguars failed to gain council approval.