Is it Derek Carr vs. Bengals or Carr vs. the cold?

When the Las Vegas Raiders (10-7) travel to Paul Brown Stadium to face the Cincinnati Bengals (10-7) on Saturday in the Wild Card round of the NFL Playoffs, star quarterback Derek Carr may be facing his most daunting opponent over the course of his eight-year career — the cold.

By the time the Raiders and Bengals kickoff in Cincinnati at 4:30 pm ET on Saturday, the forecasted temperature will be just 28 degrees with a windchill in the low teens. That doesn’t bode well for Carr and Las Vegas as the quarterback is a well-documented 0-5 in games where the temperature is under 37 degrees. In those five games, the Raiders have been unable to muster more than 17 points.

While the Raiders media pool didn’t ask Carr about his challenges in cold weather games this year, interim head Rich Bisaccia did address the team’s preparation and expectations surrounding playing in cold weather in Cincinnati.

“Yeah, I mean, it’s going to be the same for both teams,” Bisaccia said Thursday. “I just feel like they’re prepared
physically to do their job and they’ll get a feel for what it’s like in pre-game. I think we’ve played in Cleveland and in the last couple of years the weather hasn’t been great. And so, I think they’ll do a good job of pre-game and getting a feel for the weather, the wind, the field conditions, whatever they are, and they will be expected to go out there and play well.”

In Derek Carr’s five sub-37 degree games, he’s thrown just one touchdown in each of those contests and eclipsed 222 yards just once. Carr also has five interceptions in those conditions.

While it may be a negative on Carr’s otherwise stellar career stat sheet, one person who relishes the fact, and talked about his team’s advantage in the cold weather was Bengals coach Zac Taylor.

When asked about it this week, Taylor smiled and said: “It’s not a disadvantage.” The Bengals, as a member of the AFC North, not only play their games in cold weather most of the late-season but the Bengals practice facility next to Paul Brown Stadium is outdoors.

Despite the statistical proof of Carr and his struggles in the cold, the sample size is relatively small and he’s been clutch over the Raiders four-game winning streak that got them into the playoffs. He’s not put up gaudy numbers but the biggest statistic that matters – the win – has been on his side as his team heads into the playoffs.

The cold weather struggles of Derek Carr aren’t lost on the oddsmakers who have the Bengals as a 5-point favorite tomorrow. 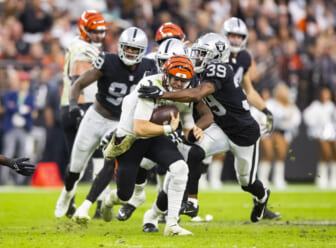