Here’s one package the Spurs should consider for Kawhi Leonard 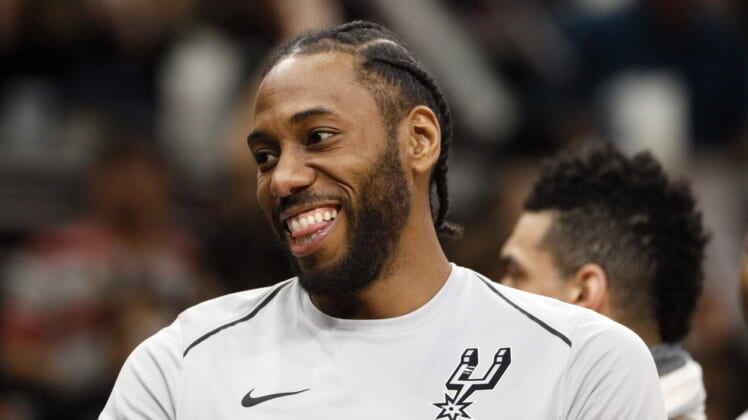 The Kawhi Leonard rumor front has been sizzling hot over the past couple days. Now that free agency is about to get started around the NBA, teams are lining themselves up for a run at the All-NBA performer.

Everyone from the Los Angeles Lakers and Boston Celtics to the Philadelphia 76ers have been bandied about as potential destinations for the disgruntled Leonard. All three have the assets to make a trade work.

With the Spurs reportedly looking to move on from Leonard completely, these rumors are not going to die down. It’s a never-ending cycle of innuendo in an NBA that’s currently filled with a bunch of hogwash. That’s the honest truth.

Working under the assumption that the fire isn’t as big as the smoke might indicate, let’s look at one possible trade that has not necessarily been bandied about.

To be clear, this isn’t a report. It’s also innuendo and conjecture. But it enables us to break from the countless Kawhi to Hollywood rumors that have circled us at a larger clip than sharks trying to get their feed on.

We know the Spurs prefer to move Leonard to the Eastern Conference. Why wouldn’t they? We also know they want a package that will help keep the team competitive. Again, why wouldn’t they?

Working under this scenario, there’s one trade possibility everyone seems to be ignoring. Kawhi Leonard and Pau Gasol to the Milwaukee Bucks for Khris Middleton, Malcolm Brogdon, John Henson and Matthew Dellavedova.

Putting on our fan hats for a second here, it works perfectly under ESPN’s trade machine.

From a Spurs perspective, this makes a whole lot of sense. It gives the team three players either entering their prime or in the early stages of their prime. That includes an underrated wing in Middleton who averaged 20.1 points per game last season and could immediately step in as Leonard’s replacement.

Former NBA Rookie of the Year, Malcolm Brogdon, has the ability to play both point guard and the two-guard position. He could very well slide in as an upgrade over San Antonio’s current cast of shooting guards next to Dejounte Murray. Meanwhile, Henson is still only 27 years old and has room to grow.

By moving Gasol in this deal, the Spurs rid themselves of a bad contract. And unlike Henson, he’s unlikely to be a worthy trade chip moving forward.

As much as this hypothetical deal makes sense for San Antonio, it could make even more sense for the Bucks. Certainly, there would be a risk that Leonard might leave the Bucks in free agency next summer. That’s where a potential sign-and-trade could come in handy.

If the star forward is comfortable with a smaller market like Milwaukee, there’s no reason to believe he wouldn’t be happy playing alongside all-everything youngster Giannis Antetokounmpo. Talk about one of the most intimidating duos in the entire NBA.

Moving on from Middleton might hurt here, but the Bucks just selected a potential sharpshooter from the perimeter in Donte DiVincenzo in the first round of this year’s draft. He could team up with Eric Bledsoe to form a solid backcourt. With Thon Maker and Tyler Zeller set to hold down the fort at center, we’re talking about one of the most-talented teams in the Eastern Conference.

So while we continue to hear rumors about the Lakers and Celtics, let’s not ignore the up-and-coming Bucks as a potential trade partner for San Antonio. Stranger things have happened.