Giannis Antetokounmpo to the Warriors is reportedly in play 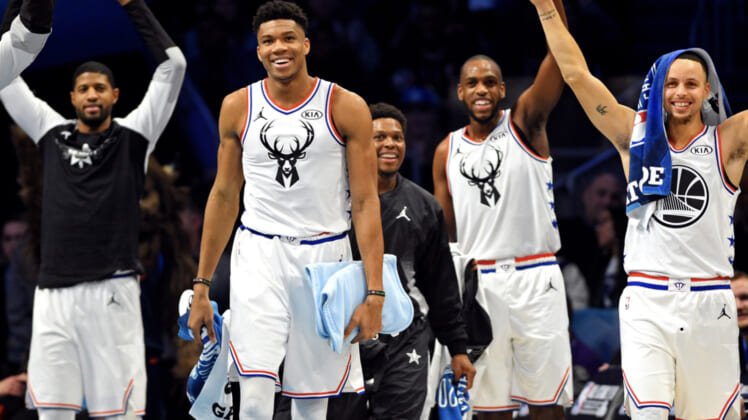 His Milwaukee Bucks sit at 50-8 on the season. They could very well join only previous iterations of the Chicago Bulls and Golden State Warriors to win 70-plus games.

Everything seems to be going swell reigning NBA MVP Giannis Antetokounmpo. Despite this, rumors continue to persist that the Greek Freak could move on from the Bucks once he hits free agency after next season.

If that is the case, the Bucks might have to consider trading Antetokounmpo in order to get something for the star.

Media personality Colin Cowherd focused on this in talking about Giannis’ future on his daily Fox Sports 1 show. He broke some news in the process, indicating that Antetokounmpo to the Golden State Warriors is in play.

This should not be shocking to anyone who has followed the NBA recently. Despite boasting the worst record in the NBA, the five-time defending Western Conference champions are going to be a force moving forward.

Golden State will get Stephen Curry back this coming weekend. He’s missed all but four games this season with a broken hand. Fellow star Klay Thompson will miss the entire campaign with a torn ACL.

These Warriors have the pieces in place to compete for a title moving forward. Their decision to trade D’Angelo Russell to the Minnesota Timberwolves only adds to this.

Golden State received Andrew Wiggins and a top-three protected NBA Draft pick in 2021. Said pick is unprotected in 2022. Add in their own high lottery pick in 2020 as well as Wiggins, and the Warriors have the assets to acquire someone of Giannis’ ilk.

These rumors have been hovering behind the scenes for some time. Giannis is said to like the San Francisco Bay Area and is friends with Curry.

If he were to move on from Milwaukee, Golden State absolutely makes the most sense.