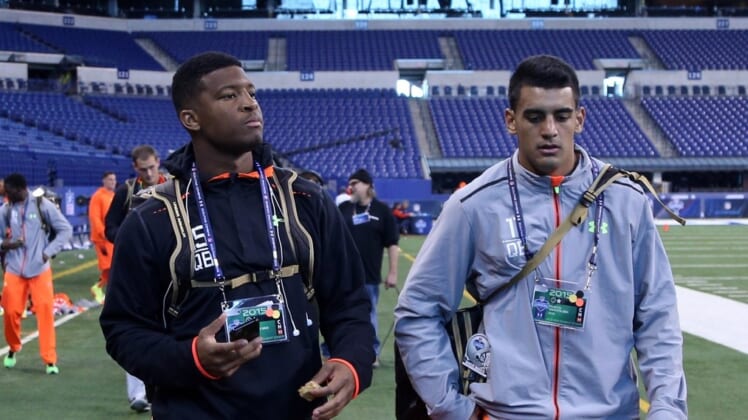 The NFL Draft is almost upon us! By the time the clock strikes midnight on Friday, the first round will be completed. What may happen? Check below to find out!

Not much to say here other than the bombs that Jameis is going to throw to Mike Evans will be nice for years to come.

Occam’s Razor in effect. Tennessee seems married to taking Mariota at two if it cannot move the pick. Given their asking price, I think Mariota ends up going here and battling Andrew Luck for years to come.

Amari Cooper has gained traction here, but I have heard that Dupree is coveted by general manager Dave Caldwell. Dupree is a physical freak who could give the Jaguars a long-term LEO fit.

One of the easiest connections in the draft to make. Given the lackluster nature of the others interior lines in the AFC West, Williams should be extremely effective as a member of The Black Hole.

McCloughan wants to move down and the Niners want to move up. Cooper is the apple of the Niners’ eye. And with him, Colin Kaepernick gets a No. 1 receiver some NFL personnel have compared to Odell Beckham Jr., last year’s Offensive Rookie of the Year.

The ex-Gator fits Todd Bowles’ defensive scheme perfectly and is seen as one of the “safer” prospects in this draft class. Fowler should team with Quinton Coples to give the Jets a powerful edge-rushing duo.

With Brandon Marshall gone, the Bears are able to pick up his replacement. White and Alshon Jeffery will give Jay Cutler twin towers to whom he can hoist the ball downfield. White’s after-catch ability is also underrated.

Beasley is underrated due to his lack of size, but as a pass rusher there is not a better prospect in this class. His worst-case scenario is Bruce Irvin.

Peat has a strange body type, but he has great functional strength and the ability to recover. Peat is similar to Nate Solder, and high-upside left tackles are always in demand.

St. Louis has a ton of talent throughout its team, but the interior line could use some work. Scherff is an athletic guard with the talent to be the next Logan Mankins.

Parker seems to have caught the Dolphins’ eye, and Rick Spielman is always looking to trade down. Parker should slot in as a nice piece for the Miami offense.

While I personally have a second-round grade on Shelton, his size and athletic ability cannot be denied. The Browns apparently want him to be their nose tackle of the future.

Peters’ family is chock-full of Saints fans, and the coaching staff is in love with his skill set. He is the most-talented cornerback in this class, and as long as teams are okay with his off-field questions, he should be a starter for many years in the NFL.

This is a bit of a shot in the dark pick, but Thompson has attracted the attention of many teams thanks to his awesome athletic ability and leadership skills. I fully expect the Vikings to trade down more from here to get Thompson, but he seems like an interesting option.

In 2012, the Patriots drafted Chandler Jones based on what he COULD BE rather than what he was at the time. Edwards would be a similar projection. He has all the talent in the world, but was inconsistent at Florida State. While McCloughan likes his interior DL, he needs help on the edge.

Perriman is an ex-player’s son with elite athletic ability and would fit in perfectly as a Texan. He could grow with DeAndre Hopkins to help create one of the more dynamic one-two punches at wide receiver in the NFL.

Best player available. Gurley is a versatile talent who can do a little bit of everything. Injury questions have been much more solvable in recent years, and Gurley has the special body type to heal from his issues. This is a steal for the Chargers.

With Rodney Hudson gone, the Chiefs get the best center in this draft class to replace him. Erving has a ton of upside and should be a more than adequate replacement for his fellow ex-Seminole.

The Browns love living on the edge. And although Green-Beckham’s off-field escapades makes him questionable, his talent is undeniable. Haslam makes the call and Johnny Football (or whomever starts in the City With The Lake On Fire) gets a deep threat.

The Double Byron is complete in Philadelphia as Jones will join Maxwell to form a physical cornerback tandem. Jones has amazing athleticism and is extremely intelligent, two traits Chip Kelly values higher than anything else.

Rumor has it that the Bengals are enamored with Jake Fisher, a player who can sit for a year and learn behind his teammates until he gets his time to shine. Fisher’s upside, though, is undeniable. He could end up being the best offensive tackle in this class.

While Johnson is a bit limited in terms of his ability to man up to bigger, more physically dominant wide receivers, he is a technically sound player who reminds me a bit of ex-Titan Alterraun Verner.

With Ndamukong Suh gone, the Lions need a big body next to Haloti Ngata. Brown played multiple positions at Texas and had to deal with an absurdly annoying and inhibiting coaching situation while he was there. Teams apparently like him slightly more than Florida State’s Eddie Goldman.

With Calais Campbell in tow, the Cardinals are able to get another dynamic, long-armed player to join him. Armstead is a physical freak who has yet to produce up to his physical potential.

No more Greg Hardy for Carolina, so they get one of the nice guys in this draft class to take his place. Owa is a monstrous rusher who can hold his own at the point of attack and provide some punch on Carolina’s defensive line.

Gordon is a dynamic running back who could end up being a star in the NFL. The Ravens get their replacement for Ray Rice.A player who just so happens to be the best remaining on the board.

The Cowboys could use an attacking edge player and Jerry Jones has been willing to take risks on players in the past. Gregory has the talent to be the best edge rusher in this class. If the Cowboys have the patience to develop him, he will turn into a nice complement to Demarcus Lawrence.

The Broncos need a big thumper on defense, and McKinney brings that to bear with his tough style of play. He should fit in well with the bullying nature that the Broncos want to have on this side of the ball.

Rowe is a versatile player who can play either cornerback or safety. The Colts need a lot of help in their back four, and Rowe can provide stability at this position.

The Raiders trade up to get their left tackle of the future in Humphries, who has the athleticism and hands to be special if coached correctly. Humphries should provide Derek Carr blindside protection for a long time. Green Bay allegedly loves Denzel Perryman, but would like to trade down from this pick.

Dorsett has speed to burn and Sean Payton apparently loves him. He would be scary in combination with Brandin Cooks.

Clemmings’ stock has slipped a bit in recent weeks, but he is definitely in play here at number 32 for the Patriots. New England may end up trading out of this pick, but offensive line should definitely be a point of emphasis for the team this year.