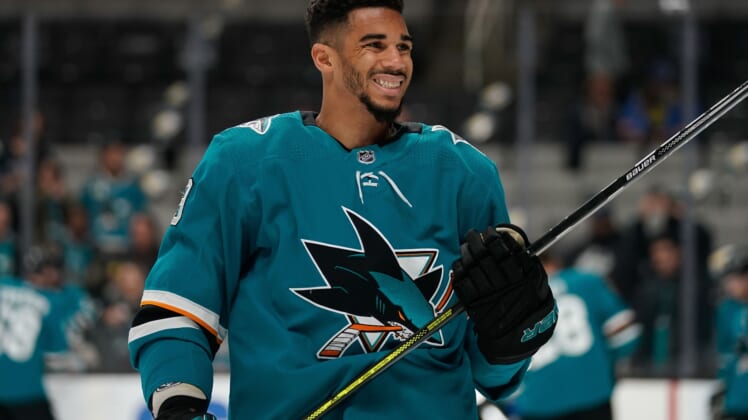 When news of San Jose Sharks star Evander Kane filing for bankruptcy broke, citing $26.8 million in debt, many sportswriters and fans around the NHL reflected on a career filled with ugly headlines. The 29-year old Canadian has played for three different teams, bringing controversy and creating headlines in every stop throughout his career. From doing push-ups with stacks of money to commissioning billboards to get his girlfriend back, here are five times Evander Kane made headlines for his controversial actions.

His $500,000 lawsuit from the Cosmopolitan in Las Vegas

Most recently, Kane made headlines in November 2019. He was sued by The Cosmopolitan of Las Vegas, with the luxury hotel claiming he received eight casino markers of up to $100,000 around April 15, 2019. The timing coincides with the times the San Jose Sharks were matched up against the Vegas Golden Knights in the Stanley Cup playoffs. The lawsuit stated that Kane had not made a single payment on his debt, despite initially agreeing to pay it following repeated demands from the casino. The suit sought repayment of the loan, as well as restitution for the legal and attorney fees.

The Cosmopolitan later dropped its lawsuit against Kane, with no explanation provided,. However, they did cite that the $500,000 loan is a courtesy that some patrons of the casino are allowed. Interestingly, the alleged extension of the payments came the night after Kane got into an on-ice scuffle with Vegas forward Ryan Reaves, and the Golden Knights are the first team in the NHL to sign a gambling partnership. Earlier in the same season, Kane was fined $113,000 after knocking over a referee for breaking up a fight between him and Golden Knight Deryk Engelland.

While he was a member of the Buffalo Sabres, Kane bought a billboard over the Posh 1 Oak nightclub in Los Angeles, trying to win back his then-girlfriend Mara Teigen. Teigen, a model with Wilhelmina, seemed to want an apology from Kane, and he delivered in a big way.

Of course, the billboard included her agent’s information, but it’s unclear whether or not the oversized, rectangular gesture scored Teigen any modeling gigs. Kane scored, though: the gesture worked, and Teigen gushed over her boyfriend’s grand move to TMZ.

The money phone and money push-ups

In December 2012, Kane found himself at The Cosmopolitan of Las Vegas So, he clearly has a favorite spot when in town. For some reason, he wanted to contact boxer Floyd Mayweather. His phone of choice? Stacks of $100 bills. In the photo, posted to his Twitter page, Kane is holding stacks of bills up to ear and gazes down at another wad of cash. The timing of the picture got him in hot water, though: in December 2012, the NHL was in a lockout, haggling with the NHL Players’ Association over money. Many hockey fans felt that Kane didn’t help the NHLPA’s case for cash when he posted the photo.

Two years later, Kane was back to posing with money again. H posted a photo of himself on Instagram doing push-ups with stacks of money on his back. The Las Vegas skyline can be seen in the background of the photo through the balcony. Though he said it was “all in good fun,” people still didn’t appreciate Kane’s showy habits. He was the highest-paid member of the Winnipeg Jets at the time, receiving $6 million a year, but he had only put up 9 points in 17 games that season. Lots of people chalked it up to his personality.

“You can take what you want from the picture,” he told the Winnipeg Sun. “It’s all in good fun. It’s not the first picture that’s been posted like that and I’m sure it won’t be the last.”

As a member of the Sabres in February 2016, Evander Kane fancied himself a visit to Toronto to partake in the NBA All-Star Game festivities. So, he made the less than two-hour drive and crossed the border to partake. Reportedly, he enjoyed himself so much that he spent the night at a hotel in Toronto, overslept, and missed the Sabres’ practice. He was then suspended for one game. The team’s Twitter mentioned nothing about why he was suspended, tweeting simply:

“Coach Bylsma: Evander Kane missed practice. Broke a team rule. We will be dealing with it interIn the same season, Kane was fined $113,000 after knocking over a referee to break up a fight between him and Golden Knight Deryk Engelland.break upnally.”

But, Kane solved the mystery on his own. He posted much of his night at the NBA All-Star Game on his Snapchat stories and his Instagram page. Reports surfaced that he had called the Sabres the night of the game telling the team he wouldn’t be at practice the next day. Naturally, this caused a rift between Kane and his teammates, in addition to his falling out of favor with the coaching staff.

These reports are, by far, the most egregious of the bunch. While he was a member of the Jets in 2013, he was sued for assault following an alleged incident in Vancouver. Kane was born in Vancouver and spent much of his offseason in British Columbia, and the Winnipeg Free Press reported an incident in Kane’s hometown.

A Vancouver-area man named Lev Makievsky is seeking unspecified financial damages from Kane in a statement of claim filed last week in the Supreme Court of British Columbia. None of the allegations has been proven.

Reports surfaced that Kane had known Makievsky for roughly four years at the time of the alleged assault and that they ran into each other at around 2 a.m. on the night in question, while Makievsky was leaving work. Makievsky’s claim did not provide details about the alleged incident but offered up a long series of injuries he claims he suffered as a result of the encounter, which includes a concussion and an unspecified permanent physical disability.

For his part, Kane said that he threw three punches in self-defense, only after Makievsky tried to get him to fight. Kane claims he refused, prompting the Vancouver resident to charge and swing at the NHLer. That’s when Kane threw three punches, knocking his alleged attacker to the ground. Makievsky then got up and swung again and Kane responded by pushing him to the ground and leaving. No charges were filed.

As a member of the Sabres in 2016, Kane was sued by a woman named Rachel Kuechle over an alleged assault in the hotel room where Kane lived. She said she met him at a bar, and that he invited her back up to what he said was a party. When they arrived, though, the room was empty, and Kane allegedly assaulted her, causing multiple injuries.

This assault charge came a short time after he pleaded not guilty to separate and unrelated assault charges, stemming from an incident in which the NHL player was accused of grabbing three women at a Buffalo nightclub. Serving as a celebrity bartender, Kane alelgedly grabbed three women by the hair. An employee of the bar, a male, also claimed to have had an incident with Kane. The case was later dropped in court and the files were sealed.

While there are a few more incidents involving Evander Kane and indiscretion–namely with an abortion lawsuit as well as rifts with his teammates (particularly in Winnipeg)–these five incidents definitely tarnished his reputation in the NHL.