Boxing’s most marquee fight in the welterweight division has been put on hold as it has been announced that unified IBF and WBC Welterweight champion Errol Spence Jr. will be pulling out of his fight with Manny Pacquiao after suffering a torn retina.

This fight was set to be Spence’s second defense of his unified welterweight titles, coming off a victory against Danny Garcia in December. It was also set to be his second fight back since being involved in a near-fatal car crash.

This fight now has an interesting narrative as prior to Ugas becoming WBA “Super” World Welterweight champion, it was Pacquiao who held that belt winning it from Keith Thurman in July 2019.

Pacquiao went on to be declared a champion in recess after over a year of inactivity. In that time, Ugas won the vacant WBA “Regular” World Welterweight title against Abel Ramos. In February, after 19 months of Pacquiao being out of the ring, Ugas was promoted to the “Super” World champion. 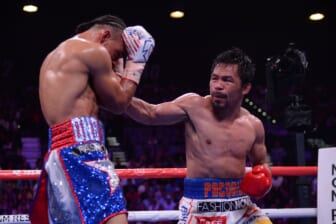 Before Pacquiao vs Errol Spence was finalized, there were negotiations of a unification bout between Spence and Ugas but that was shelved for the former.

This will be Ugas’ first title defense since being promoted to “Super” world welterweight champion.