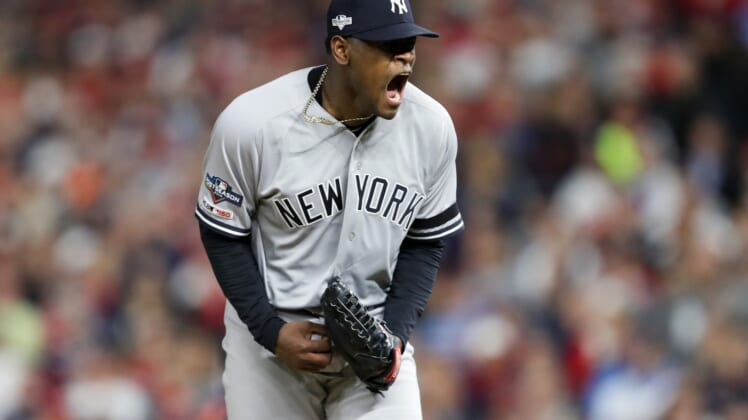 Monday represented a full slate of Major League Baseball postseason action with four teams inching their way to the next round.

It started with the Rays looking to avoid elimination at home against the Houston Astros. Showing they had some fight left in them, Tampa Bay dominated to the tune of 10-3. That sets up Justin Verlander to go Game 4 for Houston on Tuesday.

Unfortunately, the same thing can’t be said about the Minnesota Twins. Once again, they were disposed of in quick fashion by the New York Yankees.

Over in the National League, the Washington Nationals rode Max Scherzer to a Game 5 in Los Angeles against the Dodgers. We’ll also be getting a Game 5 in Atlanta on Wednesday after Yadier Molina played hero ball for the St. Louis Cardinals against the Braves.

Zack Greinke not himself, as Astros lose big game

The Houston Astros had everything set up in a neat manner to dispose of Tampa Bay in a clean sweep, creating up a perfect rotation for the ALCS. Unfortunately, Greinke did not live up to his end of the bargain. The former Cy Young winner yielded six earned runs in just 3.2 innings. That included giving up three homers. It represented Greinke’s worst playoff outing since all the way back in 2011.

This is no small thing. It now forces Houston to go with Justin Verlander on short rest in Game 4. If the Astros were to fall in that game, Gerrit Cole would be forced to take the bump in a do-or-die Game 5.

Rays show some fight in front of home crowd

We’re not going to suggest that Tampa Bay magically comes back from a 2-0 series deficit to win the final three games and shock Houston in the process. However, it was awesome to see both starting pitcher Charlie Morton and the Rays’ bats come alive in what was an electric atmosphere at Tropicana Field.

The middle of Tampa’s lineup did damage with Austin Meadows, Tommy Pham and Ji-Man Choi combining for four RBI. Though, it was the three-run blast from Kevin Kiermaier in the second that set the table here.

The Rays now have an opportunity to force a Game 5 in Houston with a win on Tuesday. They’ll do so with Justin Verlander making his first career postseason start on short rest. From there, who knows?

Braves failing hard when it counts the most

Monday’s brutal extra-inning loss to the St. Louis Cardinals was just a continuation of what we’ve seen from Atlanta thus far in the series. Braves hitters were 0-for-9 with runners in scoring position. They left the bases loaded three times. Meanwhile, Atlanta is a combined 4-for-34 with RISP through four games.

Even more shocking than this stat is the fact that the middle of Atlanta’s order has done absolutely nothing.

It obviously goes without saying that Atlanta must step up in this area come Wednesday at SunTrust Park. If not, the team’s season will end in disappointing fashion and its recent playoff failures with continue.

Love him or hate him. That depends on whether you’re a St. Louis Cardinals fan. Either way, this future Hall of Famer came up big time with his team on the verge of elimination Monday night. It started with a clutch two-out single in the bottom of the eighth off Shane Greene to plate the tying run.

Then in the bottom of the 10th, Molina took to the plate against Braves Opening Day starter Julio Teheran with runners on the corners and one out. He proceeded to drive in the game-winning run on a sacrifice fly before trolling the Braves on his way off the field. Molina is a savage. He’s been doing this for the better part of two decades. And he is the reason why this series is heading back to Atlanta for a decisive Game 5.

This NL Cy Young candidate received a lot of flack for his struggles in the wild-card game against the Milwaukee Brewers, giving up multiple jacks in a less-than-stellar performance. After coming out of the bullpen earlier in the series, Scherzer took to the mound on just two days’ rest for a Nationals team facing elimination Monday.

The results were epic. Scherzer labored through seven innings, giving up just one run and four hits while striking out seven. He let Ryan Zimmerman and Co. do the rest from the plate in a 6-1 win over Los Angeles to force Game 5 on Wednesday. By going so deep into this game, Scherzer preserved fellow ace Stephen Strasburg for that do-or-die game. Big time stuff from Mad Max here.

This is no small thing. Los Angeles knew that it was going to be a bullpen game with Rich Hill starting in Game 4. He went 2.2 innings, giving up just one earned run in the process. Unfortunately, the Dodgers had to use six pitchers in this game.

The hope here is that this is not going to be a big deal with Walker Buehler starting Game 5 on Wednesday. Clayton Kershaw will also be available. And with all hands on deck, this shouldn’t be an issue. However, Washington was saved by Scherzer going seven. Los Angeles didn’t have the same luck on Monday. That could play a role in Game 5. We’ll see.

Luis Severino could be an X-Factor

After missing all but three regular-season starts due to injury, New York’s ace took to the mound in a potential series-clinching Game 3 outing against the Twins. He looked absolutely electric in a four-inning start that saw the Twins scrape together zero runs and just four hits while striking out four times.

This is no small thing. We’re not sure how much Severino will be extended throughout the remainder of the playoffs. What we do know is that he gives an otherwise questionable Yankees rotation that ace in the hole moving forward — almost literally. That will be huge against either the Rays or Astros.

Twins just had no chance against the Bronx Bombers

Fans in Minneapolis must have had that gut feeling heading into the ALDS against a longtime nemesis that had in the past made quick work of the Twins. Their best regular season since back in 1965 did nothing to calm these nerves. Were the Twinkies in for yet another uncomfortable postseason exit?

From pretty much the get, this came to fruition in front of our yes. Minnesota was outscored 18-6 in the first two games before falling in lifeless fashion, 5-1, on Monday night. It was a frustrating end to a banner year for Minnesota. One now has to wonder what the team can do to get over that proverbial Yankee’ hump. Sadly, the Twins remain payroll restrictive without any real hope of matching wits with New York moving forward.