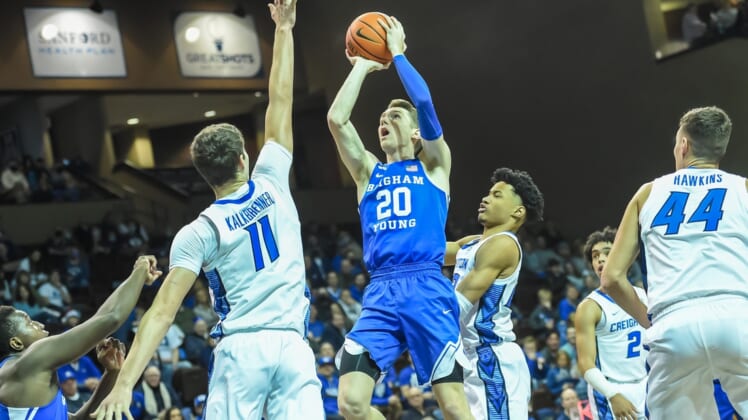 Ryan Hawkins scored 19 of his season-high 25 points in the first half to lead Creighton to an 83-71 win over No. 24 BYU in a nonconference neutral-site game Saturday at Sioux Falls, S.D.

BYU took advantage of Creighton failing to make a field goal for more than three minutes to cut its deficit to 63-53 with 8:06 left. The Bluejays answered with a 7-1 run, capped by a dunk in transition by Hawkins, to pull out to a 70-54 lead with 5:25 left.

Alex Barcello led BYU (8-2) with 28 points on 11-of-20 shooting from the field and 5 of 7 from 3-point range with four assists. Seneca Knight added 13 points for the Cougars.

Ryan Nembhard had 17 points for Creighton before fouling out and Alex O’Connell added 15 points. Ryan Kalkbrenner finished with 14 points and nine rebounds for the Bluejays, while Hawkins added eight rebounds.

Creighton trailed 2-0 after the first shot in the game but rallied to take a 10-2 lead and never trailed thereafter.

The Bluejays went on a 12-0 run to build a 36-19 lead with 6:03 left in the first half. Nembhard had five points and Kalkbrenner had four in that stretch.

BYU, which shot 34.3 percent from the field in the first half and had eight turnovers in the opening 20 minutes, trailed 48-30 at halftime.

The Cougars committed 15 turnovers that led to 17 points for Creighton, while the Bluejays had only nine turnovers.

BYU failed to take advantage of a 42-36 rebounding edge as Creighton outscored the Cougars 36-28 in the paint.

Creighton’s 57.1-percent field-goal shooting in the first half was enough to make up for a 28-percent shooting performance in the second half. The Bluejays shot 45.0 percent for the game.