Cleveland Browns quarterback Deshaun Watson met with investigators for the National Football League regarding the league’s inquiry into more than two dozen accusations of sexual misconduct and assault. It could be a major step towards a potential resolution for Watson and the Browns.

Days before several of Watson’s accusers sit down with HBO Sports to share their allegations, Watson’s lawyer Rusty Hardin addressed the ongoing investigation into the Pro Bowl quarterback.

In an interview with the Cleveland Plain Dealer, Hardin said he anticipates the NFL will request another sit-down interview with Watson. Following that meeting later this offseason, he believes the NFL is targeting an announcement regarding discipline for the star quarterback in June.

It’s important to note that Hardin believes the NFL will have established potential discipline for Watson in June. However, the new CBA requires the league to submit any potential violations of the personal conduct policy to a third-party ruling.

Watson, represented by the NFL Players Association, will have an opportunity to prevent evidence in his defense. After reviewing evidence presented by both sides, the judge appointed by both the league and players’ union will make a ruling on whether or not Watson violated the NFL’s code of conduct. 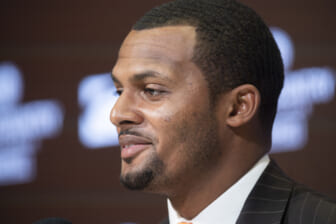 If the judge decides Watson deserves a suspension, commissioner Roger Goodell can then appeal it and push for a lengthier suspension. However, he no longer has complete authority over punishment for violating the personal conduct policy. Watson will likely be the first NFL player to go through the appeals process.

As for Watson’s 22 civil suits, a settlement isn’t imminent. Barring one of the cases being heard in July, the two parties have agreed to table a civil court appearance until after the 2022 NFL season.

The Browns have already braced for a potential suspension, signing veteran quarterback Jacoby Brissett early this offseason. If Watson is suspended for the entire 2022 season, it’s possible Cleveland might revisit things with Baker Mayfield to gauge his interest in being the Browns’ starting quarterback in his contract year.