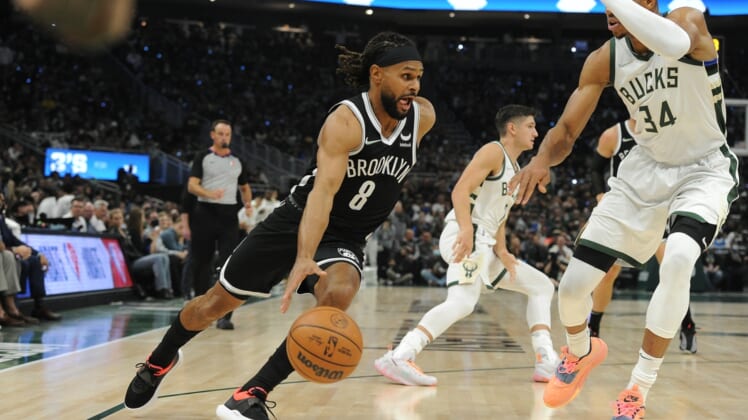 Giannis Antetokounmpo collected 32 points, 14 rebounds and seven assists Tuesday night as the Milwaukee Bucks opened defense of their second NBA championship with a 127-104 victory over the visiting Brooklyn Nets, in a matchup many think will comprise the Eastern Conference finals.

Before the game, the Bucks unveiled their championship banner and celebrated their first title since 1971 by handing out rings consisting of 360 diamonds (total wins under this ownership) and 4.14 carats of emeralds (representing Milwaukee’s area code).

On the four-month anniversary of Milwaukee eliminating the Nets in Game 7 of the Eastern Conference semifinals in Brooklyn, Antetokounmpo dominated. The NBA Finals MVP shot 12 of 25 from the field and converted 7 of 9 free throw attempts in 30:57 before leaving to a standing ovation late in the fourth quarter.

Khris Middleton added 20 points and nine rebounds as Milwaukee shot 45.7 percent and hit 17 3-pointers. Reserves Pat Connaughton and Jordan Nwora added 20 and 15 points for the Bucks, who got 45 points from their second unit on a night in which Milwaukee attempted 21 more shots (105 to 84) than the Nets.

Jrue Holiday chipped in 12 points, but the Milwaukee point guard left in the second quarter with a heel contusion.

Kevin Durant totaled 32 points and 11 rebounds for the Nets, whose only lead was 2-0 in the game’s opening minutes. Reserve Patty Mills hit seven 3-pointers without a miss and contributed 21 points, while James Harden chipped in 20 points, eight rebounds and eight assists as Brooklyn shot 44 percent and hit 17 3-pointers.

Antetokounmpo nearly had a double-double by the end of the first quarter; he totaled 13 points and eight rebounds and the Bucks hit seven 3-pointers for a 37-25 lead.

Milwaukee never let the lead slip below seven points and entered the fourth with a 97-85 advantage. The Nets made one last attempt at a comeback, getting within 101-93 on a 3-pointer by Joe Harris with 8:57 remaining.